The first Grand Slam of the year- Australian Open 2022- begins on January 17. Meanwhile, ahead of the 2022 edition of the Australian Open we take a look at the last five men’s singles champions. 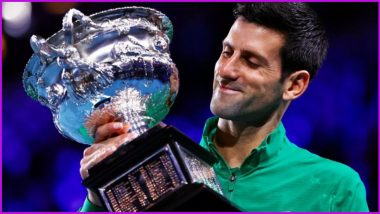 It is time for the first Tennis Grand Slam of the year- the Australia Open. The Grand Slam begins from January 17 onwards at the Melbourne Park. This year it is the 110th edition of the Australian Open and the 54th in the Open Era. In the men’s singles Novak Djokovic, who has had  Visa troubles coming into the tournament, is the defending champions. Meanwhile, ahead of the 2022 edition of the Australian Open we take a look at the last five men’s singles champions. Australian Open 2022: From Novak Djokovic To Rafael Nadal, 5 Players To Watch Out For in Men's Singles Draw in Melbourne.

2021 Men’s Singles Aus Open Winner: The Serbian defeated Daniil Medvedev to win his record ninth title in Melbourne. It was Djokovic’s 18th Grand Slam as well. In the final, Djokovic outplayed Medvedev 7-5, 6-2, 6-2 to complete his hat-trick of Australian Open titles. Interestingly, it was for the second time in his career that Djokovic won three consecutive (2011, 2012 and 2013) Australian Open titles.

2019 Men’s Singles Aus Open Winner: Djokovic defeated Rafael Nadal in the final, 6–3, 6–2, 6–3 to win the men's singles tennis title at the 2019 Australian Open. This, apparently, was first of his three back to back AO titles.

(The above story first appeared on LatestLY on Jan 13, 2022 07:30 AM IST. For more news and updates on politics, world, sports, entertainment and lifestyle, log on to our website latestly.com).