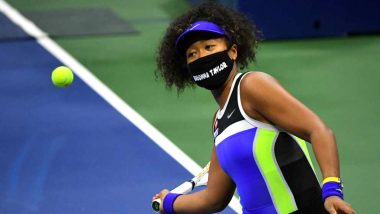 Naomi Osaka lifted the US Open 2020 women’s singles title after defeating Belarus’ Victoria Azarenka 1-6, 6-3, 6-3 in a contest that lasted one hour and 53 minutes. The 22-year-old Japanese tennis sensation emerged victorious after being a set down. It was Naomi’s second US Open title and third Grand Slam overall. She has won 2018 US Open and 2019 Australian Open. Besides her impressive performances throughout the tournament, the Japanese also used the spotlight to highlight racial injustice by wearing face masks with names of Black Americans on it. Naomi Osaka Wears Face Mask Emblazoned With Tamir Rice’s Name Before US Open 2020 Final, Impresses Netizens as She Draws Attention To Racism (Watch Video).

Meanwhile, following her title win Naomi took to Twitter and wrote, “I would like to thank my ancestors because everytime I remember their blood runs through my veins I am reminded that I cannot lose [sic].” Naomi Osaka Reacts After Defeating Victoria Azarenka in US Open 2020 Finals, Twitter Goes Berserk Congratulating Japanese Tennis Ace (Read Tweets).

I would like to thank my ancestors because everytime I remember their blood runs through my veins I am reminded that I cannot lose.

Naomi wore face mask with Breonna Taylor’s name on it during her round one clash. She then wore masks with names of Elijah McClain, Ahmaud Arbery, and Trayvon Martin during the round two, three and four respectively. For the quarter-finals clash the Japanese sported mask with George Flyod’s name on it. In semis and final, she wore masks with names of Philando Castile and Tamir Rice on them respectively.

(The above story first appeared on LatestLY on Sep 13, 2020 09:54 PM IST. For more news and updates on politics, world, sports, entertainment and lifestyle, log on to our website latestly.com).