One of the important and prestigious tennis competitions, the Wimbledon is just a few days away. Ahead of the tournament, let us take a look at the live streaming and telecast details of in India 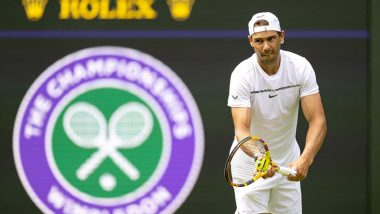 Wimbledon 2022 is set to kickstart in a few days' time and some of the best in the sport would be seen in action once again as they all aim to compete for the title. The main draw of the competition is set to get underway on June 27. Novak Djokovic and Iga Swiatek would enter as top seeds in the men's and women's singles categories, respectively. Some of top stars would be seen in action, the likes of which include French Open champion Rafael Nadal, Stefanos Tsitsipas, Andy Murray and Carlos Alcaraz among others. Daniil Medvedev would miss out since Russian players are banned due to the crisis in Ukraine while Alexander Zverev has been ruled out with an injury. Roger Federer is also another big name on the absentee's list. Wimbledon 2022 Schedule, Date, Time, Top Seeds And All You Need to Know About The All England Lawn Tennis Championships

In the women's singles category, Serena Williams is set to make her return to the court and it would be interesting to see how far she makes it in the competition. Current world number one Iga Swiatek is definitely a favourite to secure another title win after her incredible and undefeated 35-match winning run so far. Naomi Osaka would not compete in the competition due to an Achilles' tendon.

The Wimbledon 2022 edition will be played from June 25, 2022, to July 10, 2022. The tournament would be played at the All England Lawn Tennis and Croquet Club, at Church Road, Wimbledon. Wimbledon 2022 matches would generally start after 4 pm IST (Indian Standard Time).

Where To Watch Wimbledon 2022 Live Telecast On TV?

Star Sports are the official broadcasters of the competition in India. Thus, fans can watch live telecast of Wimbledon 2022 matches on the Star Sports Select channel.

How To Watch Wimbledon 2022 Live Online Streaming In India?

Wimbledon 2022 would also be available for fans for live streaming. Disney+ Hotstar, the OTT app for Star Sports, would be providing live streaming of the Wimbledon 2022 matches. But fans would need to pay a nominal fee to watch the live matches of the tournament.

(The above story first appeared on LatestLY on Jun 26, 2022 04:00 PM IST. For more news and updates on politics, world, sports, entertainment and lifestyle, log on to our website latestly.com).