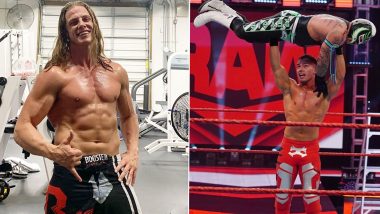 We witnessed an exciting episode of Monday Night Raw August 3, 2020 episode where we saw the return of Shane McMahon who introduced the concept of Raw Underground. Now fans will look forward to NXT and SmackDown this week. But before that, you should be aware of the latest happenings in WWE. In this article, we will share with you top five breaking WWE news which includes Austin Theory's suspension to Matt Riddle reaction on Raw Underground and other interesting updates which you will want to know. WWE Raw Aug 3, 2020 Results and Highlights: Seth Rollins to Face Dominik Mysterio at SummerSlam; Apollo Crews Defeats MVP to Retain United States Title.

This might come as a piece of shocking news for WWE viewers as 23 years old young talent Austin Theory has been suspended from WWE. Wrestling expert Dave Meltzer replied to a fan that Austin Theory has received an 'unannounced suspension of sorts' when a fan asked about the status of the wrestler. Austin Theory was last seen on Raw as part of Seth Rollins Monday Night Messiah faction. However, since many weeks Theory is not to be seen on Raw, which Dave Meltzer feels can probably be sort of unannounced suspension.

It is absolutely a wonderful sight when a wrestler pays tribute to his colleague or former professional wrestler. Edge paid respect to Ron Simmons on Twitter recently for appreciating the contribution made by him towards the company. Edge is also currently working in the writing team of Raw. Ron Simmons was also bought to Raw and there was speculation for the establishment of Nation of Domination. However, it did not happen.

The SmackDown star Matt Riddle never leaves an opportunity to comment on the recent happenings in WWE. Shane McMahon debuted the shoot fight-style segments on the recently-concluded episode of Monday Night which is termed as Raw Underground. Riddle posted a video on social media stating that he is excited to watch Raw Underground, however the wrestler did point out that it was very familiar to Josh Barnett’s Bloodsport from a couple of years ago.

4. Melina Speaks About Her WWE Return

Former WWE Diva Melina spoke about her WWE return on this past week episode of Instinct Culture with Denise Salcedo. Melina is currently signed with National Wrestling Alliance (NWA) and she did mention that she is happy with her current job. However, if WWE did come up with a good opportunity for her she could think of her WWE return. Melina also mentioned that her heel characters in WWE caused a lot of negativity in her life which led to depression. WWE never let her come out of the heel character throughout her reign. WWE NXT July 29, 2020 Results and Highlights: Dexter Lumis Earns Second Spot in North American Title Ladder Match at TakeOver XXX; Karrion Kross Eyes on Keith Lee’s World Championship Belt.

Chris Jericho has recently revealed that he is interested to bring Ricochet to AEW. Chris Jericho's comment has sparked rumours of Ricochet joining AEW, as 'The One And Only' is being used by WWE nowadays as the punching bag of 'The Hurt Business'. Ricochet and Cedric Alexander are usually seen getting beaten up by Bobby Lashley, MVP and Shelton Benjamin in Tag Team matches on Raw. Ricochet was brutally defeated by Brock Lesnar at Super ShowDown 2020 in the world title match which lasted meagre for only a few minutes.

(The above story first appeared on LatestLY on Aug 05, 2020 09:01 AM IST. For more news and updates on politics, world, sports, entertainment and lifestyle, log on to our website latestly.com).