WWE Raw Aug 3, 2020, took place at Performance Center in Orlando, Florida. Last week the red brand of WWE received the lowest 'third-hour' viewership in its history. WWE made sure that this time, they come up with better creative ideas. The show kicked-off with Apollo Crews and MVP match for United StatesChampionship. 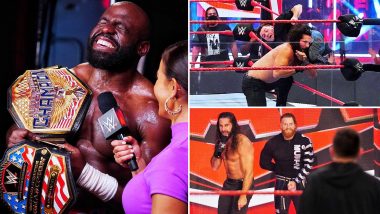 WWE Raw Aug 3, 2020, took place at Performance Center in Orlando, Florida. Last week the red brand of WWE received the lowest 'third-hour' viewership in its history. WWE made sure that this time, they come up with better creative ideas. The show kicked-off with Apollo Crews and MVP match for United StatesChampionship. MVP proclaimed himself as champion at Extreme Rules 2020 after Apollo Crews was not in a condition to fight. Crews made sure that he defeats MVP to retain the United States title, which actually belonged to him. Rey Mysterio's son Dominik Mysterio finally got a big break of his career as he will have his debut fight against Seth Rollins at SummerSlam 2020. Meanwhile, you have arrived at the right platform, if you are looking for WWE Raw Aug 3, 2020 results and highlights. WWE Raw July 27, 2020 Results and Highlights: Randy Orton Challenges Drew McIntyre For Title Showdown at SummerSlam; Sasha Banks Defeats Asuka by Count-Out to Become Women’s Champion (View Pics)

We saw Seth Rollins come out with Buddy Murphy this week on Raw. This time Monday Night Messiah chose ringside commentator, Tom Phillips, for sacrifice. However, Samoa Joe came to his rescue and challenged Rollins for a match. Before the match could take place, Seth and Buddy Murphy started assaulting Joe by steel chair shots. It was at that time Dominik Mysterio came to Samoa Joe's aid and start hitting Rollins and Murphy with kendo sticks. The Monday Night Messiah before leaving said Dominik that he accepts his challenge for a match at SummerSlam 2020. WWE News: From Bray Wyatt Tweeting Interesting Quote to Randy Orton’s Son Completing High School Graduation, Here Are Five Interesting Updates to Watch Out For.

In another segment of Raw, we saw the return of Shane McMahon, who came up with the concept of Raw Underground fight. We saw the Viking Raiders battling many new talents and wrestlers in the rapid-fire fight. Shane O'Mac also introduced the towering Dabba-Kato, who ruthlessly and brutally knocked out two opponents in rapid-fire succession. The team of MVP, Shelton Benjamin and Bobby Lashley, The Hurt Business had the last laugh in the end as they assaulted all opponents in the end at The Raw Underground Fight. Two members of the Hurt Business lost their title in the recently-concluded episode of Raw, MVP lost to Apollo, while Benjamin got defeated In a triple-threat match for 24/7 title which had Akira Tozawa and R-Truth. Tozawa pinned R-Truth to become new 24/7 champion.

Nia Jax has been suspended indefinitely without pay by Pat Buck. Jax refused to apologise the WWE official for attacking him last week and instead challenged him for a match. Buck refused for the match and then got hit by a head butt by The Irresistible Force. Shayna Baszler and Sasha Banks were in action this week on Raw, however, their match ended with no contest as Asuka attacked Bayley near ringside. The Empress of Tomorrow then challenged The Legit Boss for the title match at SummerSlam 2020, to which Banks replied that Asuka will have to defeat Bayley next week on Raw to get her Raw Women's Championship rematch.

The Riot Squad Defeats The IIConics

“I am the chosen one...then, now, forever!” @dmcintyrewwe & @randyorton are on a collision course for #SummerSlam! #WWERAW

@dominik_35 is ready for a FIGHT with @wwerollins at #SummerSlam! #WWERaw

#RawUnderground is now under the management of #TheHurtBusiness! What could this mean going forward on Monday nights? #WWERAW

WWE Champion Drew McIntyre has promised to put an end to the Legend Killer reign of terror at SummerSlam 2020. In the upcoming episode of Raw, it will be interesting to see how Randy Orton plays a mind game with the Scottish Psychopath.

(The above story first appeared on LatestLY on Aug 04, 2020 01:45 PM IST. For more news and updates on politics, world, sports, entertainment and lifestyle, log on to our website latestly.com).