WWE News: From Edge & Daniel Bryan Joining Writing Team to The Miz Speaking About His Retirement, Here Are Five Interesting Updates You Need to Know 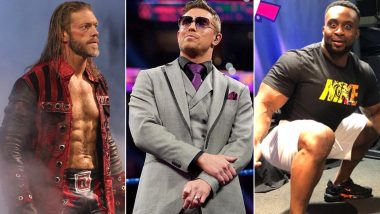 There are a lot of things happening in WWE these days which are quite interesting and fans are always eager to know about these things. The week starts with WWE Raw, then follows NXT and finally, it ends with SmackDown.  WWE is taping shows without the presence of outside audience at Performance Center in Orlando, Florida due to the ongoing coronavirus pandemic situation. Meanwhile, we bring to you five latest news from WWE, which include Edge and Daniel Bryan joining the writing team, Big E getting a single push on SmackDown to The Miz speaking about his retirement and many more. WWE SmackDown July 24, 2020 Results and Highlights: Bray Wyatt Returns With FireFly Fun House, Jeff Hardy Defeats Sheamus in Bar Fight (View Pics)

Edge and Daniel Bryan are writing and scripting the storyline of Raw and SmackDown these days. Both wrestlers are indeed excellent wrestlers and are currently on break. Dave Meltzer of Wrestling Observer Newsletter recently revealed that Edge and Daniel Bryan are helping the creative team write the script of their respective brands. WWE News: From Edge vs Randy Orton at WrestleMania 37, MVP Long-Term Deal to Reformation of ‘Nation of Domination’, Here Are Five Interesting Updates to Watch Out For.

2. Big E to Get a Single Push on SmackDown

As per the storyline, Kofi Kingston has declared himself injured this past week on SmackDown. The New Day lost to Shinsuke Nakamura and Cesaro at Extreme Rules 2020 to lose their SmackDown Tag Team Championship belt. Kingston said this past week on SmackDown that he got injured during that match and probably will stay out of action for six weeks. Xavier Woods, also the member of The New Day is injured since October last year. This indicates that its time for Big E to get a single push on SmackDown where he could even get the opportunity for Universal Championship.

3. The Miz Reveals When He Will Retire

Miz is the host of Cannonball, USA's new 10-episode competition series. which show airs on the USA every Thursday at 8 pm local time. While doing the promotion of Cannonball on Twitter a fan asked The Miz when will he retire and does he plan to take up any role in WWE. To this question, The Miz replied he will consider retirement when there when it's not fun anymore.

Miz Speaks About His Retirement

Whenever it stops being fun. https://t.co/okmQS1SE94

Mike Bennet and his wife Maria Kanellis-Bennett recently spoke to ROH Strong Podcast, where they discussed their time with WWE. Mike Bennet said that the moment COVID-19 budget cut was announced, he realised that he would be released by WWE. Along with him, his wife was also released by the company which put the couples in deep financial trouble as they just had two newborn babies. His struggle and bad time with WWE, once gave him a thought to quit wrestling and do something different. However, Mike Bennett is now looking forward to fighting in Ring of Honor where he will work more like a professional wrestler rather than sports entertainer.

Finn Balor turned 39 years old on July 25, 2020. The Irish wrestler on his birthday tweeted that his latest birthday was made special by his wife, space painting, pizzas and doughnuts. The NXT star event went on to mention that prior to this he had the best birthday night when he made a debut on Raw and defeated Roman Reigns.

I debuted on Raw & beat Roman on my birthday before....

WWE Universe will now look forward to the upcoming episode of NXT and SmackDown. Nikki Cross will face Bayley this week on SmackDown for Women's Championship, also it will be interesting to see what Karrion Kross has in mind for Keith Lee on NXT.

(The above story first appeared on LatestLY on Jul 28, 2020 09:00 AM IST. For more news and updates on politics, world, sports, entertainment and lifestyle, log on to our website latestly.com).