WWE News: From Edge vs Randy Orton at WrestleMania 37, MVP Long-Term Deal to Reformation of ‘Nation of Domination’, Here Are Five Interesting Updates to Watch Out For 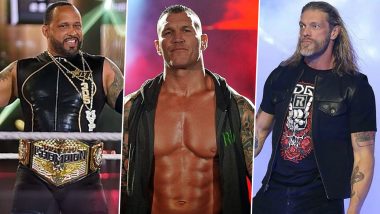 Fans of WWE are always eager to know updates about their favourite superstars and shows. These days a lot of things are happening in WWE especially when they are taping shows during coronavirus pandemic situation where there are no outside audiences. Meanwhile, you have arrived at the right page if you are looking for the latest WWE news. In this article, we will tell you about Edge vs Randy Orton match at WrestleMania 37, MVP long-term deal with WWE and reformation of famous faction 'Nation of Domination' and many more. WWE News: From The Undertaker Speaking About Wrestler’s Court, AJ Styles Taking a Shot at Paul Heyman to Rey Mysterio’s Contract Extension, Here Are 5 Interesting Updates to Watch Out For.

1. Edge vs Randy Orton For WrestleMania 37

This is indeed big news for wrestling fans as Edge and Randy Orton are the most loved and appreciated wrestlers who have delivered us with electrifying matches in the year 2020. Edge defeated Randy Orton at WrestleMania 36 in 'Last Man Standing Match' which was definitely one of the best matches in the history of 'Show of Shows'. The Viper took his revenge at Backlash 2020 by defeating Edge in a one on one match which was termed as 'The Greatest Wrestling Match Ever'. Rated-R superstar suffered torn triceps during the match at Backlash, he will take at least eight months to recover. Wrestling expert Dave Meltzer writes in this week's Wrestling Observer Newsletter that the company wants to promote an 'I Quit' match between the warring duo at WrestleMania 37 which is scheduled to take place on March 28, 2021. The feud between Edge and Randy Orton was supposed to end at SummerSlam 2020, however with Edge's injury the company has now postponed their plan to WrestleMania 37.

MVP is currently doing a good job for WWE as in-ring talent. He declared himself as the United States Champion after Apollo Crews was not fit in the condition to fight for the title match at Extreme Rules 2020. Recently speaking the Gorilla Position podcast, MVP revealed that he is in negotiations with WWE on a long-term deal. He also said that in future he could see himself doing the role of what Paul Heyman does in WWE. As of now, he is also the mouthpiece of Bobby Lashley. WWE NXT July 22, 2020 Results and Highlights: Keith Lee Relinquishes North American Title; Karrion Kross Defeats Dominik Dijakovic to Continue His Winning Streak (View Pics)

3. Re-Establishment of 'Nation of Domination'

4. Drake Maverick Has Been Rehired

Drake Maverick was fired in April 2020 under the short-term budget control scheme of WWE amid coronavirus pandemic situation.  However, he has now been rehired, the wrestler while speaking Indiatoday.in revealed that when Triple H offered him a new contract he was more relieved than happy.

Talented NXT star Karrion Kross who is currently enjoying an unbeatable streak at the gold and black brand of WWE recently said that Randy Orton is funny. Kross in a recent interview with ProWrestlingSheet.com's Ryan Satin was asked about Randy Orton taking a dig at his brand, to which the NXT superstar replied that he finds Randy Orton has a great sense of humour. Karrion Kross defeated Dominik Kijakovic in the last episode of WWE NXT on July 22, 2020. Kross is expected to soon get into a feud with NXT champion Keith Lee.

Fans are now looking forward to WWE SummerSlam 2020 where Drew McIntyre and Dolph Ziggler match has already been booked for World title. But before that, it will be interesting to see how Sasha Banks manages to win the Raw Women's title without the presence of Bayley. Stay tuned with LatestLY for more news and updates from WWE.

(The above story first appeared on LatestLY on Jul 25, 2020 09:01 AM IST. For more news and updates on politics, world, sports, entertainment and lifestyle, log on to our website latestly.com).