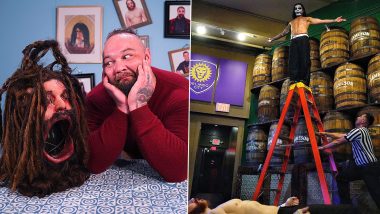 WWE SmackDown July 24, 2020, took place at Performance Center in Orlando, Florida. This was the first episode of the blue brand of WWE after the conclusion of action-packed Extreme Rules 2020. The recently-concluded episode of SmackDown offered fans with lots of excitement and surprises. Bray Wyatt returned with his Firefly Fun House and had a cryptic message for its viewers. Jeff Hardy finally taught Sheamus the lesson for playing with his feeling as the enigmatic wrestler defeated Celtic Warrior in the bar fight. Scroll down below to know more about the results and highlights of WWE SmackDown July 24, 2020. WWE News: From Edge vs Randy Orton at WrestleMania 37, MVP Long-Term Deal to Reformation of ‘Nation of Domination’, Here Are Five Interesting Updates to Watch Out For.

Bray Wyatt after defeating Universal Champion Braun Strowman in Wyatt Swamp fight non-title match returned with his Firefly Fun House show.  Wyatt spoke to a lantern that represented his former self, saying that its time was over and now it is The Fiend's time. Jeff Hardy and Sheamus displayed a brutal fight in the bar where Celtic Warrior even shoved Hardy face-first into a urinal. However, Jeff Hardy won the match by giving Swanton Bomb from the ladder.

This week we saw a rift in the friendship of Alexa Bliss and Nikki Cross as they got into a debate. Prior to that, they both interrupted Sasha Banks and Bayley when the champions were addressing the audience. However, the discussion somewhere turned into a heated conversation between the best buddies. Nikki Cross defeated Alexa Bliss in one on one match where she earned the right to challenge Bayley for the title next week on SmackDown.

@jeffhardybrand pulled out all the stops to get the victory over @wwesheamus in the #BarFight! #SmackDown

After winning the Fatal 4-Way Match, @wwegranmetalikk will face @ajstylesp1 for the #ICTitle next week on #SmackDown!

@riddlebro picked up the win over @tonynese and celebrated it by calling out @baroncorbinwwe! #SmackDown

After @itsmebayley forced them to face each other, @nikkicrosswwe has defeated @alexa_bliss_wwe_ and gets her shot at the #SmackDown Women’s Championship next week!

“You had your chance...it’s his turn now” #BrayWyatt has delivered a very ominous warning! #SmackDown

WWE fans will now look forward to Sasha Banks vs Asuka match in the upcoming episode of Raw for Women's title where Bayley is not allowed to interfere. Speaking about SmackDown Women's champion, she might survive against Nikki Cross in the upcoming episode of the blue brand as we can sense Alexa Bliss interfering in the match next week and then enter into a feud with Nikki Cross.

(The above story first appeared on LatestLY on Jul 25, 2020 02:40 PM IST. For more news and updates on politics, world, sports, entertainment and lifestyle, log on to our website latestly.com).