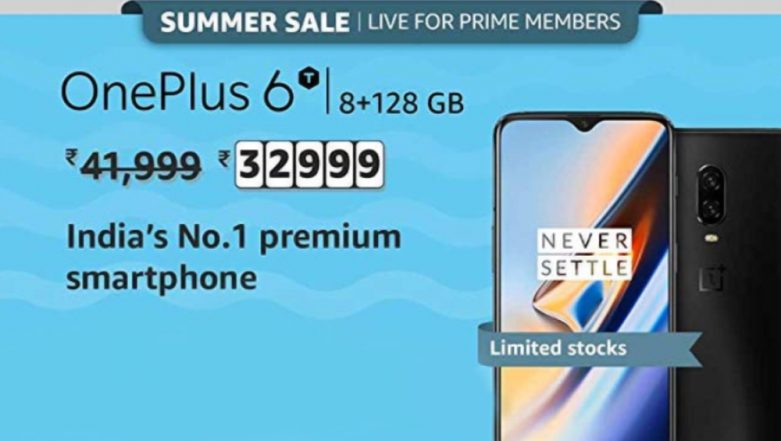 As OnePlus is gearing up to launch OnePlus 7 Series in India on May 14, the phone maker seems to be clearing out the stocks of OnePlus 6T. As a part of Amazon Summer Sale 2019, the e-commerce giant is offering 8GB RAM variant of OnePlus 6T at Rs 32,999. Apart from the discounted price, the customers can also avail exchange benefits of up to Rs 7,850 on the purchase of OnePlus 6T. It is important to note that Amazon Summer Sale 2019  is open for prime customers and it will kick-off for regular customers by midnight. OnePlus 7 Pro Pre-bookings Now Open in India at Rs 1,000 via Amazon.in.

Additionally, the 6GB RAM and 128GB internal storage variant was also made available at Rs 29,999 and the same is currently out of stock. The base variant of OnePlus 6T was offered at the lowest price ever since it was launched in the country. The handset also attracted exchange benefits of Rs 7,850 on the purchase of OnePlus 6T (6GB RAM) variant. The customers can also avail extra 10 percent discount on transactions for EMI options through SBI debit and credit cards. OnePlus 7 Pro's Triple Rear Camera Officially Teased Ahead of May 14 India Launch

As far as the specs are concerned, the OnePlus 6T comes in 3 variants - 6GB + 128GB, 8GB + 128GB & 8GB + 256GB. It sports a 6.41-inch FHD+ Optic AMOLED display with resolution of 2340 x 1080 pixels. The phone also gets a waterdrop notch housing 16MP front camera. Under the hood, there is class-leading Qualcomm Snapdragon 845 chipset which is mated up to 8GB of RAM and up to 256GB of internal space. The phone also packs Adreno 630 GPU for flagship smartphone experience. Coming to the camera department, there is a dual rear camera at the back (20MP primary and 16MP secondary sensors) with optical image stabilisation. The phone is backed by a 3700 mAh battery with OnePlus' Dash charge technology. OnePlus 7 Flagship Smartphone Likely To Be Priced Around Rs 40,000: Report

OnePlus India will be launching the new OnePlus 7 Series in the country on May 14. And, it is quite evident that the phone maker is looking to clear out the stocks ahead of the launch. OnePlus India has started taking pre-orders for OnePlus 7 Pro wherein the interested buyers can pre-order the device at just Rs 1,000. More details about the smartphone will be made official at the launch.