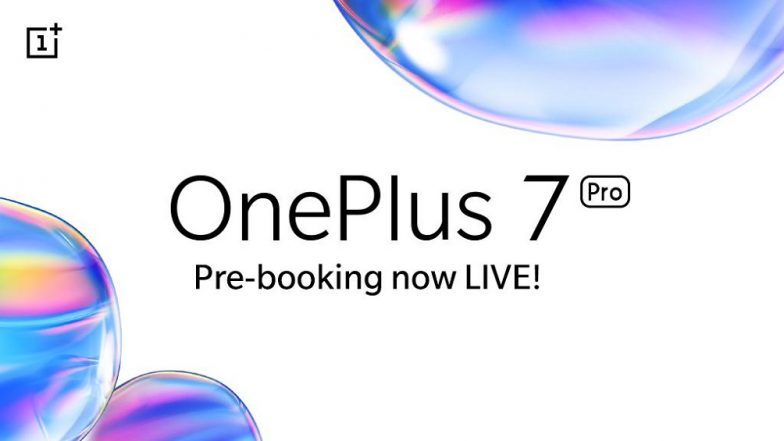 OnePlus, the Chinese smartphone maker will be launching the new OnePlus 7 Series in the global as well as Indian market on May 14, 2019. Like all other OEMs, OnePlus is also bring triple rear camera setup to its upcoming OnePlus 7 Series, which will be seen on OnePlus 7 Pro. OnePlus aims to take things to a new level with the new flagship series. We already know that the smartphone will be seen in two different version that are likely to differ in terms of specifications and features. Scheduled to go official on May 14, the company on Friday officially initiated the pre-bookings for OnePlus 7 Pro on Amazon India. OnePlus 7 Flagship Smartphone Likely To Be Priced Around Rs 40,000: Report.

The interested customers pre-booking the new OnePlus 7 Pro at just Rs 1,000 will receive 6 months free screen replacement worth Rs 1,500. Ahead of the launch, a new render has surfaced on the internet hinting that OnePlus 7 Pro smartphone will be seen in all-new shade, which will be called as 'Nebula Blue'. Courtesy of German site - WinFuture, the rendered image also highlights OnePlus' chinless design and curved OLED display. OnePlus 7 Smartphone Design Revealed in Music Video Ahead of India Launch; Gets Notch-less Display and Dual Rear Cameras.

On the specification front, the OnePlus 7 Pro smartphone will sport best-in-class 6.67-inch AMOLED display with a 90-Hz refresh rate and resolution of 3120x1440 pixels. For optics, there will be a triple sensors at the back comprising of 48MP lens, 16MP wide-angle sensor & an 8MP telephoto camera. It is also reported that the 48MP lens will come with optical and electronic image stabilisation (OIS and EIS). At the front, there will be 16MP pop-up camera with f/2.0 aperture for video calling and selfies. OnePlus 7 Pro's Triple Rear Camera Officially Teased Ahead of May 14 India Launch.

Under the skin, the phone will be powered by the latest chipset from Qualcomm, Snapdragon 855. This SoC will be clubbed with up to 12GB of RAM and up to 256GB of internal space. We can also expected a bump in battery capacity of OnePlus 7 Pro. It is expected that OnePlus 7 Pro will be backed by a massive 4000 mAh battery with Warp charging support. The new OnePlus 7 Series smartphone is likely to be priced from Rs 38,000 up to Rs 46,000.