Cupertino-based tech giant Apple is expected to unveil its next-generation smartphone -- iPhone 13 -- with improved Wi-Fi 6E support. Wi-Fi 6E is an extended version of the Wi-Fi 6 framework with the additional benefit of a 6GHz band. 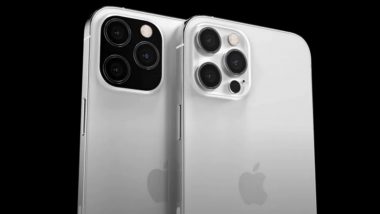 San Francisco: Cupertino-based tech giant Apple is expected to unveil its next-generation smartphone -- iPhone 13 -- with improved Wi-Fi 6E support. Wi-Fi 6E is an extended version of the Wi-Fi 6 framework with the additional benefit of a 6GHz band. The company upgraded from Wi-Fi 5 to Wi-Fi 6 with the iPhone 11 lineup in 2019, which offers significantly improved speeds and security, GizmoChina reported. Apple iPhone 13 Series Likely To Be Launched by Mid-September 2021: Report.

However, the Wi-Fi 6E brings minimal changes compared to Wi-Fi 6, except for an added 6GHz band. But it should result in increased bandwidth and less interference for devices, it added.

The report also talks about the upcoming smartphone lineup from Apple adopting LiDAR sensor for the camera module across the lineup. Currently, the iPhone 12 series have a LiDAR sensor but only for the high-end Pro and Pro Max models.

While the company has not revealed anything about the iPhone 13 series, it is speculated that the devices will come with more advanced displays, improved cameras and a smaller notch compared to the current model. A recent survey has revealed that many iPhone users want the upcoming iPhone model to be named 'iPhone 2021' instead of 'iPhone 13'.

According to the survey, a total of 74 per cent of respondents said they hoped "iPhone 13" will be named something else. The respondents also voted for the best potential name, with "iPhone (2021)" taking the top spot with 38 per cent of the vote. Around 26 per cent thought that the "iPhone 13" was the best name and only 13 per cent said that they would like to see the devices called the "iPhone 12S".

(The above story first appeared on LatestLY on Jul 19, 2021 08:34 AM IST. For more news and updates on politics, world, sports, entertainment and lifestyle, log on to our website latestly.com).