Apple has submitted a blueprint of a bendable smartphone at the US Patent and Trademark Office after Samsung launched Galaxy Fold earlier this week. 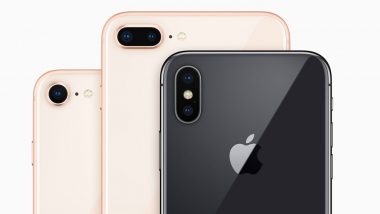 San Francisco, Feb 22: After Samsung showcased it $2,000 foldable smartphone here, Apple has submitted a blueprint of a bendable smartphone at the US Patent and Trademark Office, indicating Apple's progressive development towards building a foldable device. The patent application describes a display with hinges that can fold in half or in thirds. The display could be used in anything from phones and tablets to laptops, wearables and even mobile accessories, The Verge reported on Thursday. $2000 Galaxy Fold Smartphone is Samsung's Answer To Future; Gets 12GB RAM & 6 Cameras.

Speculations surfaced in 2018 that Apple could bring a foldable iPhone in 2020, which would be able to double up as a tablet.

"Apple's design plans were filed back in October and the patent application only means the idea is out there and hasn't been approved yet," the report said. Facebook Axes Onavo Protect VPN App from Google’s Play Store Post Privacy Scandal.

Ushering in the foldable smartphone trend, Samsung on Thursday officially launched its "Galaxy Fold" smartphone priced under $2,000. A lot of companies, including Microsoft and Huawei, are working aggressively on their foldable devices.

While Microsoft recently filed for a patent showing a device mechanism that allows a single display to be folded shut by a hinge from the inside of the device, Huawei has also confirmed it plans to launch a 5G foldable phone, likely during the Mobile World Congress to be held in Barcelona next week, the media reported.

(The above story first appeared on LatestLY on Feb 22, 2019 05:35 PM IST. For more news and updates on politics, world, sports, entertainment and lifestyle, log on to our website latestly.com).