Samsung's First Foldable Smartphone - Galaxy Fold features six lenses - three in the back, two on the inside and one on the cover. 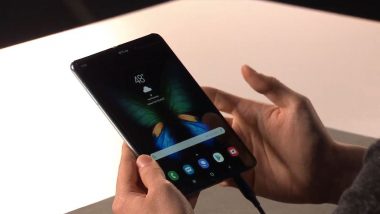 San Francisco, Feb 22: Celebrating the first decade of its Galaxy 'S' series, Samsung has unveiled the first-of-its-kind foldable smartphone -- Galaxy Fold -- for $2,000 as a smartphone and a tablet folded into one device. The smartphone, which will be available on April 26, comes with the world's first 7.3-inch Infinity Flex Display, which folds into a compact device with a cover display that is capable of opening up to three active apps simultaneously on the main display. The internal screen does not merely bend. It folds smoothly and naturally, like a book. Samsung Galaxy S10, Galaxy Fold, Galaxy Buds, Galaxy Watch Active & Galaxy Fit Launched.

"To achieve this, we engineered a sophisticated hinge with multiple interlocking gears -- a system which is housed in a hidden enclosure for an elegant look, " the company wrote in a blog post on Thursday. Facebook Axes Onavo Protect VPN App from Google’s Play Store Post Privacy Scandal. 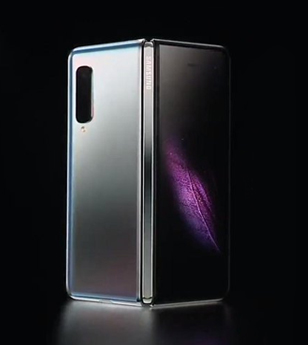 As Galaxy Fold opens and closes, apps will automatically show up where you leave off. For PC-like powerful performance, running Android 9.0 Pie, Galaxy Fold comes equipped with a high-powered, next-generation application processor (AP) chipset and 12GB of RAM. Samsung Galaxy Fold With World’s First Dynamic AMOLED Infinity Flex Display Launched; To Be Available At Starting Price of $1980 From April 26, 2019

With the dual battery, the device is capable of charging itself and a second device simultaneously via Wireless PowerShare, while connected to a regular charger. The smartphone features six lenses - three in the back, two on the inside and one on the cover.

(The above story first appeared on LatestLY on Feb 22, 2019 05:19 PM IST. For more news and updates on politics, world, sports, entertainment and lifestyle, log on to our website latestly.com).