In its upcoming smartphone Pixel 6a, tech giant Google is unlikely to feature Motion Mode -- a camera mode that the company introduced with the release of the Pixel 6 and Pixel 6 Pro. 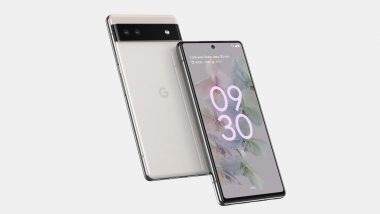 San Francisco: In its upcoming smartphone Pixel 6a, tech giant Google is unlikely to feature Motion Mode -- a camera mode that the company introduced with the release of the Pixel 6 and Pixel 6 Pro. The feature captures multiple photos at once and combines them with machine learning to add a motion blur to the background. However, that functionality might be missing from the upcoming Pixel 6a, reports XDA Developers. Google Pixel 6a Specifications Leaked via Geekbench: Report.

The report mentioned that it might use the same Google Tensor GS101 chipset as the Pixel 6 and 6 Pro, the phone might be missing a few features, including Motion Mode.

Initially discovered by Kuba Wojciechowsk, the code for showing Pixel Tips about Motion Mode is intended to appear on devices with PIXEL_2021_EXPERIENCE, which includes the Pixel 6 series and upcoming Pixel 6a.

However, the code is built to exclude devices with the codename "bluejay," which matches the expected codename for the Pixel 6a -- the bluejay name appeared in retail inventory systems recently, according to a recent report from Android Police.

The exclusion for tips about Motion Mode on the Pixel 6a might be a sign the phone will not support the camera feature. That might be due to the older camera sensors the phone is expected to use, which match what Google included on the Pixel 3-5a, instead of the upgraded setup on the Pixel 6 and 6 Pro, the report said.

(The above story first appeared on LatestLY on Apr 19, 2022 04:28 PM IST. For more news and updates on politics, world, sports, entertainment and lifestyle, log on to our website latestly.com).