Google's upcoming flagship smartphone Pixel 7 Pro will reportedly come with minor upgrades as compared to its predecessor. According to the report, the Pro model will be available in 12GB/128GB and 12GB/256GB configurations. 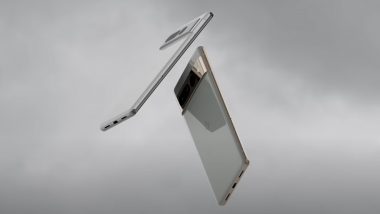 San Francisco: Google's upcoming flagship smartphone Pixel 7 Pro will reportedly come with minor upgrades as compared to its predecessor. The switch to the Tensor G2 is expected, the new chip is allegedly bringing in GPU, NPU and modem improvements, reports GSMArena. According to the report, the Pro model will be available in 12GB/128GB and 12GB/256GB configurations. There is no word on a 12GB/512GB model like the current phones. Google Pixel 7 Pro Specifications Leaked Online Ahead of Its Launch: Report.

The Pro phone is expected to have a similar 50MP main, 12MP ultra wide and 48MP telephoto setup as its predecessor, though the tele camera will allegedly use a new sensor, a Samsung GM1 stepping in to replace the Sony IMX586.

The selfie camera will have a subtle change as well -- resolution will remain at 11MP, though the new module is expected to have autofocus (using a new Samsung 3J1 sensor). The display sounds the same as before -- a 6.7-inch LTPO OLED panel with QHD+ resolution and 120Hz refresh rate. That will remain a major selling point over the FHD+ 90Hz display of the vanilla Pixel 7.

The battery will be basically the same with 5,000mAh capacity and support for 30W fast charging (though whether the phone actually hits 30W remains to be seen). Wireless charging will be supported on both Pixel 7 models. Prices are expected to remain the same -- $600 for a Pixel 7, $900 for a Pixel 7 Pro, the report said.

(The above story first appeared on LatestLY on Sep 28, 2022 02:27 PM IST. For more news and updates on politics, world, sports, entertainment and lifestyle, log on to our website latestly.com).