JioGlass, 5G, JioMart, Google Investment For '2G-Mukt' India And More: Highlights of The Big Jio Announcements Made by Mukesh Ambani at RIL AGM 2020

In his address, Mukesh Ambani made a slew of announcements, including investment from Google in Jio Platforms. 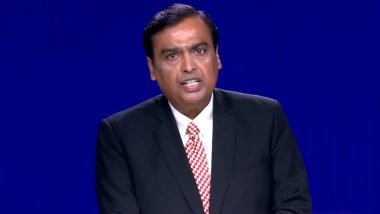 Ambani announced that Jio is developing a homegrown 5G telecom solution. "Jio has designed and developed a complete 5G solution from scratch. It will be ready for trials as soon as 5G spectrum is available and can be ready for field deployment next year," he said. One of the most important announcements made by Ambani is Google's investment in Jio Platforms. "Google will invest Rs 33,737 crores for a 7.7 percent stake in Jio Platforms," he announced.

JioGlass has also been launched at the AGM. "The Jio Glass is at the cutting edge of technology that provides best-in-class Mixed Reality services to give users a truly meaningful immersive experience," Kiran Thomas announced. "Jio Glass is making teachers and students come together in 3D virtual rooms and conduct holographic classes through our Jio Mixed Reality cloud in real-time. With JioGlass, the traditional way of learning Geography will now be History," he added.

Isha Ambani then announced JioMart, built for small-scale grocery stores and customers. JioMart was launched a few months ago in beta version in 200 cities. "JioMart is built upon two fundamental pillars -- 1. A powerful omnichannel tech-platform to unite customers, kiranas and producers. 2. A widespread physical network of Reliance Retail that takes benefits of new commerce to every corner," Isha Ambani said.

In the end, Ambani said Jio and Google are working together to develop cheap 5G smartphone. "We have sold 100 million Jio Phones till date. But there are many feature phone users waiting to upgrade to a conventional smartphone. We believe we can design an entry-level 4G or even a 5G smartphone. We believe that we can design such a phone at a fraction of the current cost. Google and Jio are partnering to build a value-engineered Android-based smartphone Operation System," he said. "The Jio-Google partnership is determined to make India 2G-mukt," he added.

(The above story first appeared on LatestLY on Jul 15, 2020 03:11 PM IST. For more news and updates on politics, world, sports, entertainment and lifestyle, log on to our website latestly.com).