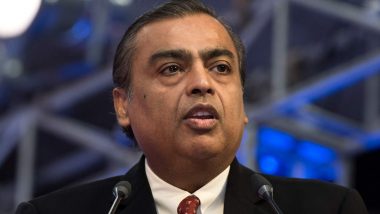 With this investment, Google has become the second-largest investor in Jio Platforms after social media giant Facebook that invested $5.9 billion (Rs 43,574 crore) for a 9.99 percent stake. "This is not just a financial but a strategic investment by the Internet giant. Thus, JPL has now four strategic partners - Facebook, Intel, Qualcomm and Google. It has also six most admired technology and financial investors and three sovereign funds, taking the total tally of investors to 14. Total funds raised is Rs 1,52,056 crore," Ambani added.

Prior to the big announcement, he welcomed companies that have invested in Jio Platforms. Reliance has secured funding for Jio Platforms from many global investors such as Facebook, Silverlake, KKR, TPG, Intel and Qualcomm, among others. Ambani has so far sold over 25 percent stake in Jio Platforms.

(The above story first appeared on LatestLY on Jul 15, 2020 02:22 PM IST. For more news and updates on politics, world, sports, entertainment and lifestyle, log on to our website latestly.com).