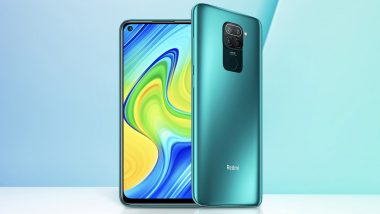 Redmi Note 9 handset was launched globally in April this year but the India launch was kept in suspense. Redmi India has shared a poster on its official Twitter handle hinting that the Redmi Note 9 India launch is near. The rear camera module revealed in the poster looks similar to the camera setup of the Redmi Note 9 that was launched globally. The image Tweeted by Redmi showcases a 'Championship belt' with a '9' in the centre & 'Redmi' & 'Note' on the other side. Redmi 9A & Redmi 9C Smartphones With 5,000mAh Battery Launched; Check Prices, Features, Variants & Specifications.

The smartphone could sport a 6.53-inch FHD+ IPS display with a resolution of 2340x1080 pixels. For optics, the handset may come equipped with a quad rear camera module featuring a 48MP main camera, an 8MP ultra-wide-angle lens, a 2MP macro lens & a 2MP depth sensor. For selfies & video calling, there might be a 13MP in-display front camera. The mobile phone is likely to come packed with a 5,020mAh battery with 18W fast charging support.

Can you guess what we're hinting at? 😉

👉 RT this tweet and head here to get notified: https://t.co/XYxRbFgKft pic.twitter.com/40uAHi8pY0

(The above story first appeared on LatestLY on Jul 09, 2020 04:56 PM IST. For more news and updates on politics, world, sports, entertainment and lifestyle, log on to our website latestly.com).