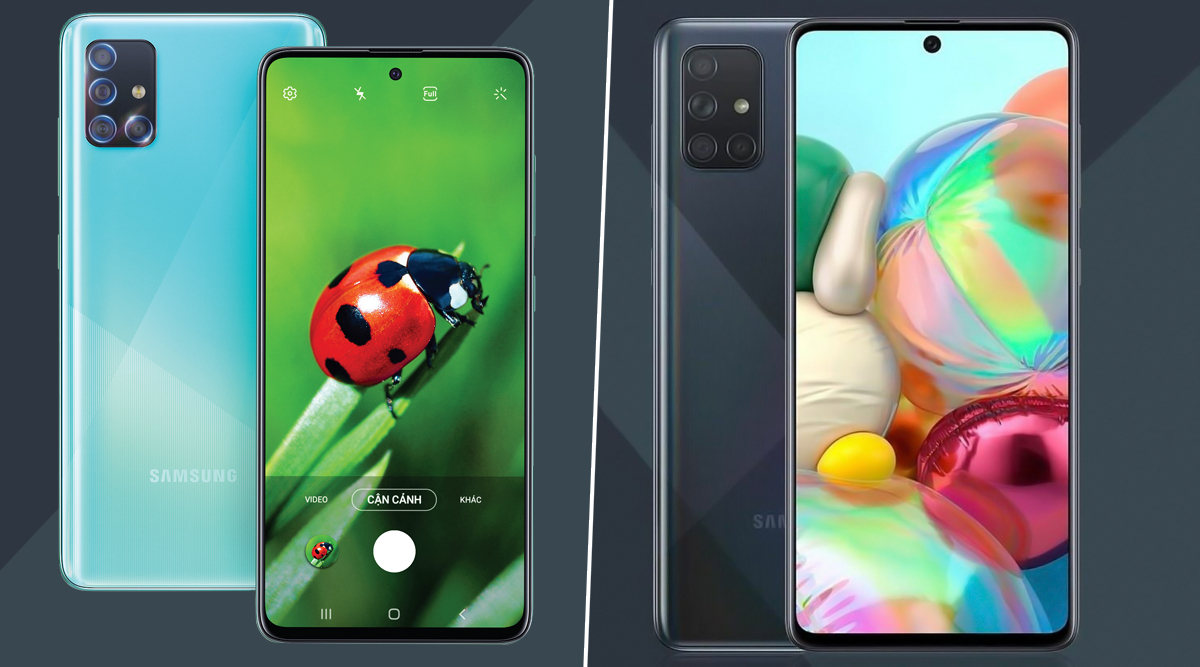 Samsung, the South Korean smartphone manufacturer, has finally announced the launch of new Galaxy A Series phones in Vietnam. Dubbed as Galaxy A51 and Galaxy A71, the two new smartphones will be part of Samsung's new Galaxy A 2020 series. Both the Galaxy A smartphones from Samsung come with a punch-hole display that has seen on the flagship devices - Note 10 and Galaxy S10. Moreover, the newly launched Galaxy A51 and Galaxy A71 smartphones are the first devices from Samsung's stable to offer macro lens. Samsung Galaxy S11 Series, Galaxy Fold 2 Rumoured To Launch on February 18 Next Year: Report.

The main underlines are the quad-camera module, in-display fingerprint sensor and bigger batteries with fast charging and much more.   As far as the prices are concerned, the new Galaxy A51 smartphone will retail at VND 7,990,000 (around Rs 24,300) in Vietnam. The phone maker has confirmed that the Galaxy A51 smartphone will be available for pre-orders from December 16 onwards. However, the device is scheduled to go on sale from December 27, 2019. It is important to note that the prices and availability of Galaxy A71 are unknown as of now.

On the specification front, the Galaxy A51 smartphone comes powered by an octa-core Exynos 9611 chipset that is clocked at 2.3GHz. The handset also flaunts a 6.5-inch FHD+ Super AMOLED display with an Infinity-O screen.

The chipset on the smartphone is clubbed with a 6GB of RAM and 128GB of internal space. The onboard storage can be expanded up to 512GB using a microSD card. Additionally, the customers can choose the smartphone in three exciting colour options - Green Crush Multicolour, White Sparkling Crush, Black Crush Diamond.

Coming to the camera department, the Galaxy A51 comprises of a 48MP primary sensor, a 5MP macro lens, a 12MP wide-angle lens and a 5MP depth sensor. At the front, the Galaxy A51 sports a 32MP shooter. The phone also packs a 4,000 mAh battery with a 15W fast charging. The phone runs on Android 10 with Samsung's One UI 2.0.

On the other hand, the Galaxy A71 smartphone comes with a slightly bigger 6.7-inch FHD+ Super AMOLED Infinity-O display. Additionally, the phone is powered by an octa-core chipset that is paired with up to 8GB of RAM and 128GB onboard space with external storage provision. The phone will be offered in four exciting shades - Prism Crush Black, Silver, Blue, and Pink.

In the camera department, the phone also uses quad cameras at the back comprising of a 64MP primary sensor, a 5MP depth sensor, a 5MP macro lens and a 12MP wide-angle lens. Upfront, the smartphone gets the same selfie cameras that of the Galaxy A51. As compared to the Galaxy A51, the phone packs a slightly bigger battery with a capacity of 4,500mAh supporting 25W of fast charging. The Galaxy A71 also runs on Android 10 with One UI 2.0 on top.