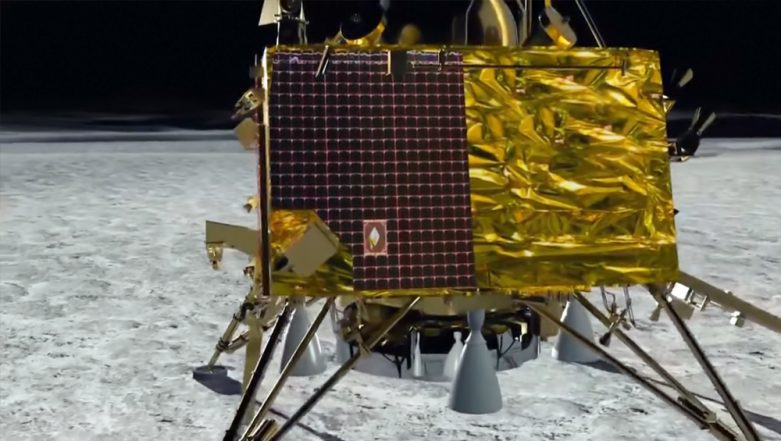 New Delhi, August 26: Chandrayaan 2, India’s second lunar mission is all set to get closer to the Moon by entering the third lunar orbit on Wednesday, August 28. The lunar bound orbit manoeuvre is scheduled between 0530 - 0630 hrs IST on Wednesday. The second lunar bound orbit manoeuvre for the spacecraft was performed successfully on August 21 as planned using the onboard propulsion system. The duration of the manoeuvre was 1228 seconds and the orbit achieved was 118 km x 4412 km. Chandrayaan 2 Explained! When Will ISRO's GSLV-Mk III Reach Moon And What Will Happen After That?

In all, there are three more orbit manoeuvres to be performed to make the spacecraft enter into its final orbit passing over the lunar poles at a distance of about 100 km from the Moon’s surface, ISRO said. The space agency said Vikram- the lander,  will separate from the Orbiter on September 2 and enter into a 100 km X30 km orbit around the Moon.

On Thursday, the first picture of Moon captured by India’s Chandrayaan-2 satellite, currently in the lunar orbit, was released by space agency ISRO.  The ISRO said that the crucial process of taking up the soft landing of the lander ‘Vikram’ onboard the spacecraft, will be taken up in the early hours of September 7. The spacecraft will then perform a series of complex braking manoeuvres to soft-land in the South polar region of the Moon. Chandrayaan 2 Launched Successfully by ISRO From Sriharikota; India Scripts History With Second Moon Mission.

The second lunar mission- Chandrayaan-2, was launched on July 22 by the most powerful rocket GSLV MkIII-M1. The spacecraft had left the Earth's orbit and entered the Lunar Transfer Trajectory on August 14. The Chandrayaan- 2 mission comprises an Orbiter, Lander (Vikram) and Rover (Pragyan). The rover is set to make the soft landing on the Moon on September 7 and if successful the mission would make India the fourth country after Russia, the US and China to achieve the feat.