The study shows that beyond the benefits of reduced extreme weather in the long term, global mitigation efforts would also lower oil prices in the coming decades, resulting in a significant economic boon for poorer countries. 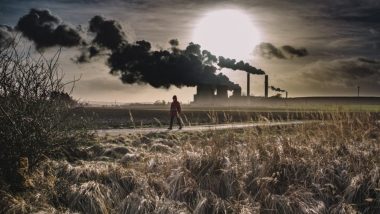 Washington DC, April 30: A study claimed that the successful global efforts to significantly limit greenhouse gas emissions would likely increase the Gross Domestic Product (GDP) growth of poorer countries over the next 30 years. The research was published in Climatic Change. Researchers examined the impact global climate change mitigation would have on the economies of poorer countries - specifically Malawi, Mozambique, and Zambia. Earth Day 2019: Here Are 5 Ways In Which You Can 'Protect Our Species'.

Devastation in Mozambique and Malawi recently caused by Cyclones Idai and Kenneth vividly demonstrate the crippling impact that extreme weather events can have on these economies. Climate change is widely expected to increase the intensity and frequency of extreme weather events such as extreme heat, droughts, and floods as well as to magnify the destructive power of cyclones like Idai and Kenneth due to sea level rise.

The study shows that beyond the benefits of reduced extreme weather in the long term, global mitigation efforts would also lower oil prices in the coming decades, resulting in a significant economic boon for poorer countries."It is abundantly clear that many low-income countries will bear the brunt of climate change impacts over the long term, and that successful efforts to rein in emissions will lessen this blow.

Our research now provides another rationale for robust climate action: the economic benefits of mitigation arrive much sooner than previously thought," said lead author Channing Arndt. Lowering greenhouse gas emissions creates two sources of economic gain for poorer countries. 60 Percent of Earth's Wildlife Has Been Lost, We Are the 'Last Generation' That Can Save Nature, Says WWF.

Second, successful mitigation policies would cause oil prices to drop due to a reduction in oil demand. If richer nations take the lead in restraining their oil use, lower-income countries will be able to transition somewhat later while benefiting from much lower oil prices during the transition period. Since nearly all low-income countries are net oil importers, such price drops would represent a significant economic windfall.

The research suggested that by 2050 these two sources of economic benefit together could increase the average GDP of Malawi, Mozambique, and Zambia by between 2 and 6 percentage points--gains that cannot occur if greenhouse gas emissions continue unabated."Previous research into the economic impacts of global climate mitigation has tended to group oil exporters, such as Nigeria and Angola, and oil importers, such as Malawi and Zambia, together in a single aggregate region that both exports and imports oil," said Sergey Paltsev, one of the researcher.

"When you look at the impacts on a country level though, most low-income countries benefit not only from having a more stable climate but also from lower fuel prices, because they are net fuel importers and the import volumes are large relative to the size of their economies," said Paltsev. Global Warming: World In the Midst of Warmest Ten Years since 1850.

How emissions policies should be structured globally remains an open question. The models producing these results assume that low-income countries are afforded space to transition more slowly because their contributions to global emissions are relatively low and such exemption allows low-income countries to proceed with the benefit of experience accumulated elsewhere.

But the researchers caution that for climate mitigation to be effective some developing countries cannot be exempted for long--many middle-income countries will soon need to adhere to required emissions reductions. 5 Biggest Threats to Our Oceans and Marine Life!

"The impact of climate change is not likely to be distributed equally across the planet, and neither are any costs associated with reducing emissions," said Arndt."We want to limit the deleterious effects of climate change on the environment and on people, particularly poor people while avoiding harming development prospects in the process. The gains from effective mitigation shown by this research could help us achieve this goal," added Arnst.