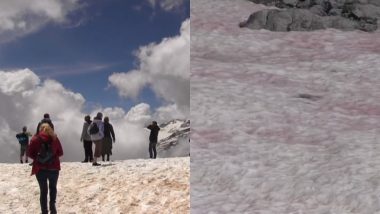 Ice in the Alps is turning pink according to scientists in Italy. The change in colour seems to have been caused due to climate change. Biagio Di Mauro of Italy's National Research Council said that the pink coloured snow seen on parts of Presena glacier is probably the effects of climate change that was caused by the same plant found in Greenland. Di Mauro, who had previously studied the algae at the Morteratsch glacier in Switzerland told AFP, "The alga is not dangerous, it is a natural phenomenon that occurs during the spring and summer periods in the middle latitudes but also at the Poles." NASA Captures Maharashtra’s Lonar Lake That Turned Pink Mysteriously, Know Why 50,000 Years Old Crater Lake Changed Its Colour.

The plant, known as Ancylonema nordenskioeldii, is present in Greenland's so-called Dark Zone. The ice is increasingly melting in this region probably due to the effect of global warming. Generally, ice reflects more than 80 percent of the sun's radiation back into the atmosphere, but as algae appear it darkens the ice so it absorbs the heat and melts quickly. Di Mauro said, "Everything that darkens the snow causes it to melt because it accelerates the absorption of radiation. We are trying to quantify the effect of other phenomena besides the human one on the overheating of the Earth." The Sky Is Pink! Cyclone Amphan Cause Purple-Pink Skies in Bhubaneswar and Twitter Is Flooded with Mesmerising Pics,

Algae Turns Ice Into Pink Colour in the Alps:

Normally ice reflects about 80% of the sun's radiation back into the atmosphere, but the algae darkens the ice causing it to absorb the heat and melt more quicklyhttps://t.co/r4YoEgMqar

VIDEO: In a first for Italy, pink snow is observed on parts of the Presena glacier, in the north of the country. The phenomenon is caused by algae that develops when snow melts, simultaneously colouring the ice a darker colour pic.twitter.com/Qkche7rXT2

Scientists in #Italy are investigating the mysterious appearance of pink glacial ice in the #Alps, caused by algae that accelerate the effects of climate change. https://t.co/8SmQXFPoA6 pic.twitter.com/KUIMlnWuh9

Similar algae were earlier observed in Greenland’s ‘dark zone,’ a region covered in dust and black carbon that acted as nutrition for dark-coloured algae. The melting ice thus exposes algae to air and water, providing it with the nutrition required to multiply further, starting a destructive cycle. The effect of this algae is worrying because it currently acts as a catalyst for ice melting in the mountain ranges. As per reachers, if global warming continues at the same pace, two-thirds of its ice range will be lost by 2100. But currently, the pink coloured snow making it look beautiful has become a topic of discussion among people.

(The above story first appeared on LatestLY on Jul 06, 2020 04:15 PM IST. For more news and updates on politics, world, sports, entertainment and lifestyle, log on to our website latestly.com).