Quadrantids Meteor Shower 2022: Date, Time, Visibility in India and Everything You Need to Know About New Year's Celestial Event

And this year, sky gazers are in luck as the Quadrantids Meteor shower’s peak coincides with a New Moon. The Quadrantids are usually active between the end of December and the second week of January, and peak around January 3-4. Let's see when, where, and how you can witness the incredible astronomical event. 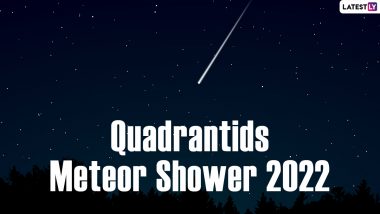 The Start Of The New Year 2022 brings along incredible and elusive astronomical occurrences. The stargazing will kick off after January 2 as the night sky become full of extraordinary events in the new year. Quadrantids Meteor Shower may not be well known to many, but this meteor shower happens every year,  and it’s still something to mark on the calendar and catch if you can. The new moon aligns with the peak of meteor activity in 2022’s first meteor shower i.e Quadrantids Meteor Shower. The new moon on January 2 will rise and set with the sun and be absent from the night sky, leaving it dark for meteor-watching. Astronomical Events in 2022: From Total Lunar Eclipse in May to Partial Solar Eclipse in October, Check Full List of Celestial Event Calendar.

When Can I Watch Quadrantids Meteor Shower 2022?

The shower owes its name to the constellation 'Quadrans Muralis'. Quadrantids Meteor Showers don't last for a long time. The Quadrantid meteor shower peaks overnight from January 2 to January 3, hitting its peak hours at 4:40 a.m. Eastern on January 3, 2022. The approximate peak hour is 4:30 to 5:30 AM.

How To See Quadrantids Meteor Shower 2022?

The fireballs come from larger particles or debris, which means they are much illuminated, and their light and color last longer than your average meteor shower. Find a secluded viewing spot, away from the city lights in Northern Hemisphere. Because of the absence of the moon, the Quadrantid shower will be visible in the dark sky. During the six hours when the shower will be in peak, there will be 25 meteors per hour. All other things being equal, for any meteor shower, you are likely to see the most meteors when the radiant is high in your sky.

According to NASA's experts, “A lot of meteor showers last days but the Quadrantids last a few hours". Enjoy Watching!

(The above story first appeared on LatestLY on Jan 01, 2022 11:15 AM IST. For more news and updates on politics, world, sports, entertainment and lifestyle, log on to our website latestly.com).