Xiaomi 11i Hypercharge Specifications Emerge Online Ahead of Its Launch 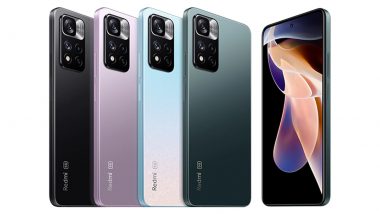 According to the tipster, the handset will be launched in India in a single variant i.e. 8GB RAM + 128GB internal storage. It will be offered in two colours - Stealth Black and Camo Green. As mentioned earlier, Xiaomi 11i Hypercharge will be a rebadged Redmi Note 11 Pro+ phone. So it will carry similar specifications as that of the China model.

The smartphone will feature a 6.67-inch AMOLED display with a refresh rate of 120Hz. The handset will be powered by a MediaTek Dimensity 920 SoC paired with 8GB RAM and 128GB of internal storage. For optics, it will sport a 108MP primary camera and come packed with a 4,500mAh battery with 120W fast charging support. Moreover, Xiaomi 11i Hypercharge will get JBL stereo speakers with Doby Atmos and Hi-Res support.

(The above story first appeared on LatestLY on Dec 01, 2021 05:46 PM IST. For more news and updates on politics, world, sports, entertainment and lifestyle, log on to our website latestly.com).