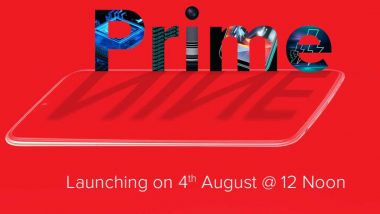 Redmi 9 to be Launched in India Launch on August 4 (Photo Credits: Redmi India)

Xiaomi's sub-brand, Redmi India, is all set to launch yet another smartphone in the Indian market today. Dubbed as Redmi 9 Prime, the affordable smartphone will go official today at 12 pm IST. The phone maker will be hosting an online event wherein the brand will unveil the much-talked Redmi 9 Prime smartphone. The interested fans can watch the live streaming of the event on its official YouTube channel. The phone maker will also be streaming the virtual event on social media and official website. Moreover, Xiaomi's website has also initiated a countdown with a ‘Notify Me' option. Mi 10th Anniversary Event 2020: Xiaomi Likely to Launch Mi 10 Pro Plus & New Products on August 11.

The phone maker has been tight-lipped when it comes to the specifications of the phone. However, we do know that the phone will sport an FHD+ display. Also, there have been speculations in the market claiming the device to be a rebranded version of the Redmi 9 global variant that was officially launched in June.

Coming to the specifications, the upcoming Redmi 9 Prime will get a 6.53-inch FHD+ display with 19.5:9 aspect ratio and a resolution of 1,080x2,340 pixels. There will be an octa-core MediaTek Helio G80 processor under the hood, which will come paired with Mali-G52 GPU along with up to 4GB of RAM. The phone will also get up to 64GB onboard storage, with internal memory expansion provision via a dedicated microSD card slot.

For photos and videos, the Redmi 9 Prime will get a quad-camera module at the back. It will include a 13MP primary camera with f/2.2 aperture, which will be assisted by an 8MP ultra-wide camera, a 5MP macro shooter and a 2MP depth sensor. For selfies, the phone comes with an 8MP selfie camera housed in a waterdrop notch. The phone will be backed by a massive 5020 mAh battery with 18W fast charging technology. Flipkart Big Savings Day 2020: Exciting Offers & Massive Discounts on Apple iPhone SE, iPhone XR, Redmi K20 Pro, Realme X2 Pro & More.

As far as the prices go, the company hasn't revealed the pricing of the phone yet. The brand will be announcing variant-wise prices of the phone during the launch event. However, the Redmi 9 global variant gets a starting price of EUR 149 which is around Rs 13,000 for the 3GB variant. The 4GB version costs EUR 179 (around Rs 15,800).

(The above story first appeared on LatestLY on Aug 04, 2020 11:00 AM IST. For more news and updates on politics, world, sports, entertainment and lifestyle, log on to our website latestly.com).