2019 Scripps National Spelling Bee Live Streaming: How to Watch the Ongoing Competition in US

The challenge began with a string of challenging words on May 26, 2019. 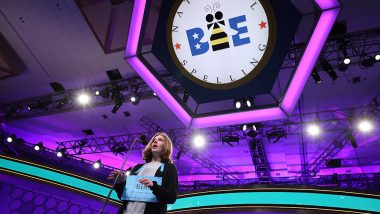 The 92nd Scripps National Spelling Bee kickstarted with a preliminary multiple-choice test. The challenge began with a string of challenging words on May 26, 2019, and will last until May 31, 2019. It is being held at Gaylord National Resort & Convention Center, Fort Washington, Maryland in the United States. You can watch all the Scripps National Spelling Bee 2019 live streaming on the 'Watch ESPN' app. At the end of the game on Wednesday, names of 50 spellers who will advance to Thursday's finals will be announced. The final competition will be aired in prime time on ESPN. 2019 Scripps National Spelling Bee: ‘Beautiful’ Among Toughest Words to Spell for Americans, Hawaiians Can't Spell 'Hawaii' Says Google Trends.

Bee Week features more than 560 spellers from all 50 states and countries from around the world. Those who win the competition will receive the trophy engraved with National Spelling Bee, the title of country's best speller and receive a cash prize of more than $50,000. They will also be awarded $2,500 cash and reference library from Merriam-Webster, $400 of reference works, including a 1768 Encyclopaedia Britannica Replica Set and a three-year membership to Britannica Online Premium. Gifts also include trips to New York and Hollywood for appearances on 'Live with Kelly and Ryan' and 'Jimmy Kimmel Live'. Scripps National Spelling Bee 2018: Know Words That Americans Google For Spelling.

Onstage preliminary will be aired starting from 8 a.m. ET and last until 6:30 p.m. On Thursday, viewers can watch the final round live on ESPN 2 starting at 10 a.m. until 2 p.m. which will conclude in the night. The show will be aired between 8:30 to 10 p.m. Last year's champion, Karthik Nemmani of McKinney, Texas, qualified through the RSVBee program and won after correctly spelling 'koinonia'.

You can check round-by-round results on its website where word list, the spelling each competitor gave and a link to the Merriam-Webster definitions of each word will be updated. This year, 562 spellers are competing in the contest. While two hundred seventy of those spellers won a regional spelling bee, 292 qualified through RSVBee, the invitational program that lets students compete at the national competition if they didn't win a regional bee but have won either their school's bee or have been a national finalist.

(The above story first appeared on LatestLY on May 29, 2019 04:56 PM IST. For more news and updates on politics, world, sports, entertainment and lifestyle, log on to our website latestly.com).