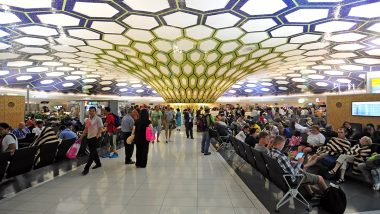 Three People were killed and at least six other wounded after at least three oil tankers carrying fuel exploded in the industrial Musaffah area near storage facilities of oil firm ADNOC in a suspected drone attack that was reported near Abu Dhabi international airport in the United Arab Emirates (UAE) on Monday. Yemen based Iran-backed Houthi rebels have claimed responsibility for the attack in UAE after police in the capital Abu Dhabi reported two fires. The Abu Dhabi police issued a statement saying that the preliminary investigations suggest that the cause of the fire are possibly drones that fell in two areas. They also added that the fire is currently being put out.  Abu Dhabi Fuel Tanker Blast: 3 Killed, Including 2 Indians, 1 Pakistani National in Suspected Drone Attacks

Police have identified the dead as two Indian nationals and one from Pakistan. The police are yet to identify the wounded whom it said suffered minor injuries.

The police issued a statement on State News Agency WAM that said the authorities have also launched an extensive investigation into the cause of the fire, however, there are no significant damages from the two accidents.

The explosion involving three oil tankers and a fire at the construction site of the emirate's new airport on Monday morning were reportedly caused by drones.

According to a Twitter post by the account linked to Houthis spokesperson Yahya Saree, the militants plan to announce a 'qualitative military operation in the UAE in the coming hours'. Media reports have also stated that both fires have been brought under control and air traffic was not affected. There was no significant damage reported but a full investigation has been launched into the Monday incident and the cause behind the fires.

The latest reported drone attack near Abu Dhabi airport came after Yemeni Houthi rebels rejected a United Nations (UN) request to release an Emirati-flagged vessel that the militants had seized earlier this month along with its 11-member crew. Houthis reportedly said that the ship was carrying 'military assets'. Meanwhile, UAE had described the Rwabee as a 'civilian cargo vessel' that was leased by a Saudi company. UAE had also said that the shop had been in the international waters and carries equipment which is used at a field hospital. Abu Dhabi Airport Attack: 2 Indians, 1 Pakistani National Killed, 6 Injured in Explosion From Suspected Drone Attack at UAE International Airport

The conflict between Saudis and the Houthis can be attributed to the failure of the political process which was set to bring stability to Yemen after the uprising in 2011 that forced its longtime president Ali Abdullah Saleh in a bid to hand over power to his deputy, Abdrabbuh Mansour Hadi. Both sides have repeatedly attacked each other since then.

(The above story first appeared on LatestLY on Jan 17, 2022 05:51 PM IST. For more news and updates on politics, world, sports, entertainment and lifestyle, log on to our website latestly.com).