Marrying their girls off also provides some sense of security: fewer mouths to feed at a time when Afghan girls have been banned from attending school and face harassment as the country deals with a humanitarian crisis and economic ruin, said the RFE/RL report. 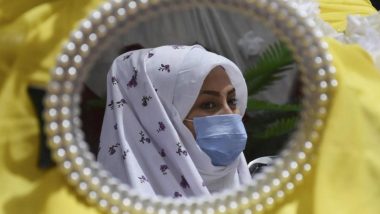 Kabul, December 2: Since Kabul fell to the Taliban in August 2021, there has been a dramatic increase in early marriages of Afghan girls -- a trend activists and human rights campaigners attribute to parents' belief that securing a spouse for their girls is better than seeing them forced to marry members of the Taliban, a media report said.

Marrying their girls off also provides some sense of security: fewer mouths to feed at a time when Afghan girls have been banned from attending school and face harassment as the country deals with a humanitarian crisis and economic ruin, said the RFE/RL report. Taliban Bans Women From Using Parks and Gyms in Afghanistan.

Shukria Sherzai, a women's rights activist in Ghor province, says the cases of forced and underage marriages have increased exponentially since the Taliban seized power. She says that many families agree to early unions in the hope of sparing them from being forced to marry Taliban members. But even if the reasoning is based on securing a better life, the effect has been devastating to the family structure, RFE/RL reported.

"Forced and underage marriages have resulted in violence and turmoil within families," she said. International rights watchdogs have documented similar trends. "The rates of child, early, and forced marriage in Afghanistan are surging under Taliban rule," noted a July report by Amnesty International. Afghanistan: Taliban Lash Three Women, Nine Men Before Sports Stadium Crowd in Logar.

Nicolette Waldman, a researcher for Amnesty International, says that the most common drivers of child, early, and forced marriage since the Taliban's takeover include the economic and humanitarian crisis and lack of educational and professional prospects for women.

Afghanistan is rife with speculation that the Taliban is contemplating a complete ban on women's education, work, and mobility in a return to the policies imposed during the extremist group's infamous first stint in power from 1996 to 2001, RFE/RL reported.

A December 2021 decree by the Taliban's supreme leader, Mullah Haibatullah Akhundzada, about women's rights was silent on women's education and work. But it outlawed forced marriages by requiring women's consent for marriage.

That requirement is apparently not being enforced. Marziah Nurzai, a women's rights activist in the western province of Farah, attributes the rise in forced and underage marriages to the Taliban's decision to close girls' schools.

She witnessed one father marrying his daughter to a drug addict in exchange for a dowry worth some $2,500. Another one sold off his 10-year-old for more than $4,000 in cash, RFE/RL reported. "Think about what will happen to such girls in the future," Nurzai said. "Since there is no hope for reopening schools, girls are losing hope and self-confidence."

(The above story first appeared on LatestLY on Dec 02, 2022 05:14 PM IST. For more news and updates on politics, world, sports, entertainment and lifestyle, log on to our website latestly.com).