In announcing the proposed staff cutbacks, Qantas boss Alan Joyce said the airline was expecting to have lost about $12 billion dollars by the middle of this year. Meanwhile, about 6,000 Qantas workers remain stood down, which means they have stopped working and are not being paid but remain as employees. 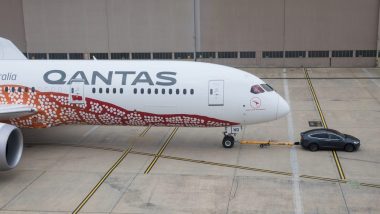 Canberra, May 20: Australian flag carrier, Qantas announced on Thursday that it will cut the airline's workforce by several hundred due to the heavy impact of the COVID-19 pandemic on its business.

In announcing the proposed staff cutbacks, Qantas boss Alan Joyce said the airline was expecting to have lost about A$16 billion ($12 billion) by the middle of this year, reports Xinhua news agency. Joyce said the subsequent cost-cutting measures would include a two-year wage freeze and a voluntary redundancy program for cabin crew on international flights. Qantas expected several hundred crew members to take the redundancies, which would come on top of 8,500 job losses since the start of the pandemic. World News | Australia in Talks with Airlines on Vaccination Passports.

Meanwhile, about 6,000 Qantas workers remain stood down, which means they have stopped working and are not being paid but remain as employees. Of approximately 22,000 roles across the group, some 16,000 are currently stood up, including all domestic crew, all corporate employees, and some international crew. 'We have to stay focused on managing our costs, especially given the competitive environment, but ultimately, this is part of being able to one day grow again,' Joyce said. World News | UK Launches Booster COVID Vaccine Study as B1.617.2 Variant Cases Rise.

Amid the gloomy forecast, he saw some bright signs for the airline, saying 'we're slowly starting to turn the corner' and noted that domestic travel was recovering well. 'Qantas and Jetstar are on track to reach a combined 95 percent of pre-COVID-19 domestic capacity for the quarter ending in June, and well over 100 percent next financial year,' he said. 'We've adjusted our expectations for when international borders will start opening based on the government's new timeline, but our fundamental assumption remains the same - that once the national vaccine rollout is effectively complete, Australia can and should open up.'

(The above story first appeared on LatestLY on May 20, 2021 03:37 PM IST. For more news and updates on politics, world, sports, entertainment and lifestyle, log on to our website latestly.com).