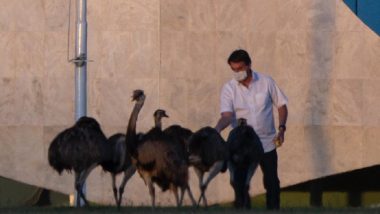 Brasilia, July 15: Brazilian President Jair Bolsonaro, placed under home quarantine since testing positive for the novel coronavirus, was bitten hard by an emu-like bird at the presidential palace in Brasilia. The incident took place on Monday, hours after Bolsonaro told reporters that the self-isolation period is "horrible". Bolsonaro, COVID-Sceptic Brazilian President, Tests Positive for Coronavirus.

Pictures released in the Brazilian media showed Bolsonaro shaking his hand after being "bitten" by rhea, a large bird similar to emu and ostrich. The President was reportedly feeding the birds with his hands while taking a stroll in the garden of presidential palace. One of the rheas whom Bolsonaro was feeding pecked him hard on his hand.

Bolsonaro had on Monday told reporters that his condition is stable and no major symptom is being felt by him. He would undertake the second COVID-19 test soon, and would end the "horrible" period of quarantine if found negative. "I am waiting anxiously to test negative. I can't bear being in isolation routinely," he said.

Bolsonaro, 65, had tested positive for the contagious disease on July 7. This was preceded by his constant weekly rallies and public meetings to mark the defiance of social distancing norms. A week before he was infected, the federal government issued an order to dilute the direction issued by provinces to mandatorily wear face-masks.

After testing positive, Bolsonaro remained unfazed, saying that the virus was eventually going to catch up with a significant section of the population. "It is important to keep the economy moving," he added.

(The above story first appeared on LatestLY on Jul 16, 2020 12:09 AM IST. For more news and updates on politics, world, sports, entertainment and lifestyle, log on to our website latestly.com).