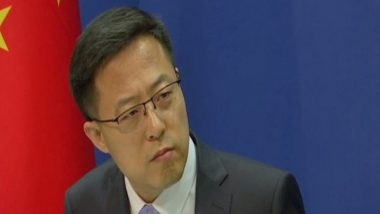 Beijing, June 30: The Indian government on Monday banned 59 apps developed by Chinese firms. Following which, Chinese Foreign Ministry spokesperson Zhao Lijian said, "China is strongly concerned, and is verifying the situation." The order came two weeks after the violent face-off between Indian and Chinese troops at the Line of Actual Control in Ladakh’s Galwan Valley.

Lijian further said, "We want to stress that the Chinese government always asks Chinese businesses to abide by international and local laws-regulations. The Indian government has a responsibility to uphold the legal rights of international investors including Chinese ones."

The reason cited by the Indian government was that these apps were engaging in activities that threatened “national security and defence of India, which ultimately impinges upon the sovereignty and integrity of India”.  This is the first time that India, the world’s second-largest internet market with nearly half of its 1.3 billion population online, has ordered to ban so many foreign apps. TikTok and Other Apps Removed From Google Play Store, Apple App Store in India After Govt Bans China-Linked 59 Mobile Applications.

The apps which are there in the ban list includes ByteDance’s TikTok, which counts India as its biggest overseas market; Community and Video Call apps from Xiaomi; two of Alibaba Group’s apps (UC Browser and UC News); Shareit; CM Browser, Club Factory, Camscanner and several others.

Earlier in the day, TikTok India said that it will comply with all data privacy and security requirements under the laws laid down by the government of India. It further issued a statement saying that the data of all Indian users is safe and has not been shared with any foreign government.

(The above story first appeared on LatestLY on Jun 30, 2020 01:28 PM IST. For more news and updates on politics, world, sports, entertainment and lifestyle, log on to our website latestly.com).