China Sanctions Senators Marco Rubio, Ted Cruz And 9 Others to Counter US Action on Hong Kong 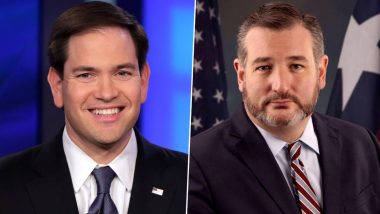 Beijing, August 10: China on Monday sanctioned 11 Americans in retaliation for similar measures imposed by the United States on Friday. The senators who were sanctioned by China include Marco Rubio, Ted Cruz, Tom Cotton and Pat Toomey. Congressman Chris Smith and Human Rights Watch Executive Director Kenneth Roth are also on the list. Individuals at non-profits and rights groups, who have been vocal against China's policies in Hong Kong are also on the list. Notably, the list does not include any member from the Donald Trump administration.

Chinese foreign ministry spokesman Zhao Lijian in a regular press briefing said, "In response to those wrong US behaviours, China has decided to impose sanctions on individuals who have behaved egregiously on Hong Kong-related issues. China Opens New Office For Security Agents to Operate in Hong Kong, A Week After Passing Controversial National Security Law in City.

The development came two days after the US imposed economic sanctions on 11 current and former Chinese officials, including Luo and Hong Kong's Chief Executive Carrie Lam. The US Treasury Department singled out Lam for "implementing Beijing's policies of suppression of freedom and democratic processes," in Hong Kong. Besides Lam and Luo, the others on the sanctions list included Hong Kong's secretaries of justice and security and the city's current and former police chiefs. People in Hong Kong are against Beijing's imposition of a controversial national security law. Hong Kong Media Tycoon Jimmy Lai Arrested Under National Security Law Over Suspected Foreign Collusion.

Earlier this month, the Hong Kong government has postponed September's parliamentary elections by a year, saying it is necessary amid a rise in coronavirus infections. On July 29, the government banned 12 pro-democracy candidates from running in the elections. Hong Kong, a former British colony, was handed back to China in 1997 under an agreement meant to guarantee a high degree of autonomy for 50 years. In Last year's district council elections, pro-democracy candidates won 17 out of 18 councils.

(The above story first appeared on LatestLY on Aug 10, 2020 05:13 PM IST. For more news and updates on politics, world, sports, entertainment and lifestyle, log on to our website latestly.com).