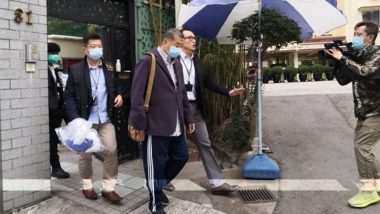 Hong Kong, August 10: Hong Kong media mogul Jimmy Lai was arrested on Monday "for collusion with a foreign country" under the new national security law imposed in the city by Beijing, a media report said.

"He was arrested for collusion with a foreign country, uttering seditious words and conspiracy to defraud," one of the sources told the SCMP.

Lai's top aide, Mark Simon, who is not in the city, was also being sought by Hong Kong police, according to the source, who would not say what offence the latter was accused of committing.

Meanwhiel, another source told the SCMP that of Lai's two sons was arrested on suspicion of collusion with foreign and external forces to endanger national security, and the other was detained for conspiracy to defraud, according to another source.

Chow was also arrested for collusion with foreign and external forces to endanger national security, while Cheung was arrested for conspiracy to defraud.

Police said the operation was continuing and so far arrested they had arrested at least seven people aged 39-72.

"They are suspected to be involved in offences including collusion with foreign and external forces to endanger national security and conspiracy to defraud," the force said. "The operation is ongoing and we do not rule out more arrests."

On July 29, four students, aged from 16 to 21, were taken into custody on suspicion of secession under the new legislation which is aimed at punishing acts of secession, subversion, terrorism, and collusion with foreign forces to endanger national security. The offence carries a maximum penalty of life in prison.

(The above story first appeared on LatestLY on Aug 10, 2020 09:01 AM IST. For more news and updates on politics, world, sports, entertainment and lifestyle, log on to our website latestly.com).