Many countries around the world are involved in struggles and clashes involving territorial disputes. Recently Azerbaijan and Armenia has a violent clash over the control of Nagorno-Karabakh region. Apart from it Isreal-Palestine, India-China, China-Taiwan etc., have also been at loggerheads for years over land dispute. 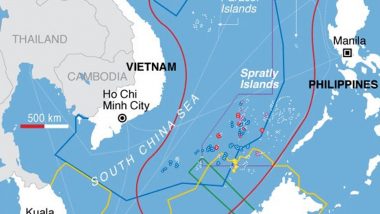 South-China Sea has one of the Biggest Territorial Disputes in the World. (Photo Credits: Wikimedia Commons)

Apart from fighting the intense COVID-19 outbreak, countries around the world are also dealing with various economic, political, social and territorial disputes. Most of the territorial disputes among countries have a long history of violent struggles, unsettled claims and voluntary or forced ceasefire with occasional violations. The recent Azerbaijan-Armenia clash traces back its origin during the 1980s Soviet Union’s breakdown.

Here is a list of other prominent territorial disputes around the world, some operating under a ceasefire, others negotiating the dispute while some fighting an undeclared, unofficial, unarmed war.

Taiwan is a small island nation in East Asia over which China claims authority. As a result of the surrender of Japan at the end of World War II, the island of Taiwan was placed under the governance of China on October 25, 1945. China considers it has a rightful authority over the island nation and has vowed to take it back, though Taiwan considers itself an independent nation and holds its own elections. The USA has openly shown its support to Taiwan. On October 15, China claimed to have tracked a US Navy warship as it passed through the Taiwan Strait and the area has been on high alert since then.

The Zionist-Israel and Islamic-Palestine both claim their right over the shared border of West Bank and the Gaza Strip. The 1967 six-day Arab-Israeli war left Israel in control of these two territories which are home to large Palestinian populations. Israel claims sole right to these territories and has imposed restrictions on Palestinian movement and activities. Palestinians claim that Jews deny any right to the land to them. Currently, Israel has full control over West Bank while Gaza is controlled by Hamas, an Islamist fundamentalist party, and is under Israeli blockade but not ground troop occupation. On October 15, Israel declared that it would construct 4,948 settlement units in West Bank which left the Palestinians fuming. Israel, Lebanon Begin UN-Mediated Talks at Naqura To Resolve Maritime Border Dispute.

It is one of the biggest and longest disputes in Asia, involving a number of countries. China claims to have ‘historic-right’ over the South-China Sea and continues to expand its military operations. It has territorial disputes with Taiwan, Brunei, Indonesia, Malaysia, Philippines and Vietnam in the South China Sea and its extension. The disputes include islands, reefs, banks and other features in the South China Sea including Spratly Islands with Vietnam, Philippines, Malaysia, Brunei, Taiwan, Paracel Islands and Gulf of Tokin with Vietnam and  Scarborough Shoal with Philippines.

India has a long history of territorial dispute with China over two areas along the borders.  Firstly, Aksai Chin is claimed by China as part of the Xinjiang Uygur Autonomous Region and Tibet Autonomous Region and claimed by India as part of the union territory of Ladakh. The other is Arunachal Pradesh, which was handed over to India as a part of the 1914 Shimla Convention signed between British India and Tibet, without China's agreement. Over the last few years, India and China have had tensions along the borders including the 73-day standoff in Doklam in 2017 and the recent Galwan Valley clashes.

Various international institutions and world superpowers have been constantly trying to resolve these land disputes, but coming to a deal that pleases and is accepted by conflicting countries is hard to strike.

(The above story first appeared on LatestLY on Oct 16, 2020 02:54 PM IST. For more news and updates on politics, world, sports, entertainment and lifestyle, log on to our website latestly.com).