With the pandemic accelerating the trend of rising gun sales, the pace has continued this year. Americans bought more than 2.3 million guns in January, the highest since last July, and overall in the first quarter, sales jumped 18 per cent, compared to the first quarter of 2020, said The Trace, a news outlet that tracks gun sales. 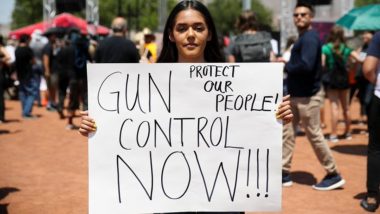 Washington, May 31: Gun sales in the US have continued amid the Covid-19 pandemic and the nationwide protests, and about a fifth of all Americans who bought arms last year were first-time owners, a media report said.

The New York Times report on Sunday quoted research data from Northeastern University and the Harvard Injury Control Research Center as saying that 39 per cent of American households own guns, and of the new owners, half were women, a fifth were Black and a fifth were Hispanic, reports Xinhua news agency.

The ratio of households owning guns is up from 32 per cent in 2016, The New York Times said, quoting the General Social Survey, a public opinion poll conducted by a research center at the University of Chicago. Gun Sales in US Break 20-Year Record After Guns Are Sold as Essential Commodity Amid COVID-19 Lockdown, Over 3.7 Million Sold in March 2020.

"While gun sales have been climbing for decades, they often spike in election years and after high-profile crimes, Americans have been on an unusual, prolonged buying spree fuelled by the coronavirus pandemic, the protests last summer and the fears they both stoked," said the report.

In March last year, the report added, federal background checks, a rough proxy for purchases, topped one million in a week for the first time since the government began tracking them in 1998.

And the buying continued, through the protests in the summer and the election in the fall, until a week this spring broke the record with 1.2 million background checks, it said.

"There was a surge in purchasing unlike anything we've ever seen," Garen J. Wintemute, a gun researcher at the University of California, Davis, was quoted as saying. "Usually it slows down. But this just kept going."

With the pandemic accelerating the trend of rising gun sales, the pace has continued this year. Americans bought more than 2.3 million guns in January, the highest since last July, and overall in the first quarter, sales jumped 18 per cent, compared to the first quarter of 2020, said The Trace, a news outlet that tracks gun sales. US Gun Violence: Two Dead, Over 20 Injured in Florida Club Shooting.

Meanwhile, shooting incidents with four or more fatalities in the US in 2021 have reached 17, compared to the whole year number of 23 in 2020, and 36 in 2019, according to Gun Violence Archive (GVA), a nonprofit research group.

Broadening the scope to include gun violence injuries, the GVA counted 610 incidents in which at least four people were shot last year, compared with 417 in 2019 and 336 in 2018. Under the GVA definition, there have been 231 mass casualty shootings in the US so far in 2021, more than one per day.

(The above story first appeared on LatestLY on May 31, 2021 11:08 AM IST. For more news and updates on politics, world, sports, entertainment and lifestyle, log on to our website latestly.com).