Gun Sales in US Break 20-Year Record After Guns Are Sold as Essential Commodity Amid COVID-19 Lockdown, Over 3.7 Million Sold in March 2020

A record-breaking number of gun purchases have been done by Americans in March 2020 amid coronavirus spread. New government data claims that more than 3.7 million total firearm background checks were conducted through the FBI’s background check system in March, 2020, as guns were considered essential service as per Second Amendment rights for self protection. 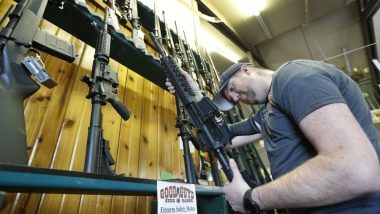 New York, April 4: Amid the reports of over 6700 people in United States of America succumbed to coronavirus, another report arrived that a record-breaking number of gun purchases have been done as essentials by Americans in March 2020. New government data claims that more than 3.7 million total firearm background checks were conducted through the FBI’s background check system in March, 2020, as guns were considered essential service as per Second Amendment rights for self protection.

Considering this massive number of checks, as reported by The Guardian, the US government says that this is by far the highest record in last 20 years. As per to adjusted statistics from a leading firearms industry trade group, more than 2.4 million people's backgrounds were checked for license after guns were classified under essential service. This is an 80 percent increase in comparison to February's data. Donald Trump Jr. Granted Permission to Hunt Alaska Grizzly Bear For $1,160, Animal Lovers Furious.

March was a record-breaking month for gun sales in the US, as gun stores were labeled "essential" businesses and remained open amid the #coronavirus crisis. pic.twitter.com/JSXYIszpwF

On the contrary, Federal Bureau of Innvestigation have stated that they had to conduct 1.2 million total gun background checks in just a week, starting March 16, 2020. Also, FBI said that highest number of firearms background checks conducted nationwide in a single day was on March 20, i.e. 2,10,308 -- which broke all previous records.

It is to be known that background checks for gun sales are conducted through the FBI’s National Instant Criminal Background Check System. Apart from this, since most of the Americans buy multiple guns from a licensed gun dealer with a single background check, it tough to reflect the total number of guns sold through checks by FBI. Meanwhile, reports also claim that since the coronavirus pandemic, sales of guns amd ammunition have soared across the country. Till now, 6,766 people have died due to COVID, while 2,65,001 have been confirmed with the deadly virus.

(The above story first appeared on LatestLY on Apr 04, 2020 12:43 AM IST. For more news and updates on politics, world, sports, entertainment and lifestyle, log on to our website latestly.com).