"The Chinese side firmly opposes and strongly protests over such kind of actions which seriously harmed the human rights of the victim," the embassy said in a statement. 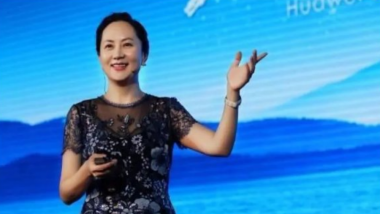 Ottawa, December 6: A top executive and daughter of the founder of Chinese telecom giant Huawei has been arrested in Canada and faces extradition to the United States, officials said Thursday, angering Beijing days into a trade war truce with the US. The detention of Meng Wanzhou, Huawei's chief financial officer, comes after American authorities reportedly launched an investigation into suspected Iran sanctions violations by Huawei, which was already under scrutiny by US intelligence officials who deemed the company a national security threat.

The arrest stirred tensions just as the United States and China agreed to a ceasefire in their trade spat while negotiators seek a deal within three months. News of her detention rippled through stock markets in Asia, particularly Shanghai and Hong Kong, with tech firms among the worst hit. By lunch Shanghai was 1.3 per cent lower while Hong Kong was 2.6 per cent off. "China is working creatively to undermine our national security interests, and the United States and our allies can't sit on the sidelines," US Senator Ben Sasse in a statement linking the arrest to US sanctions against Iran. Huawei Y9 2019 Smartphone with Kirin 710 SoC and Four Cameras Officially Announced.

"Sometimes Chinese aggression is explicitly state-sponsored and sometimes it's laundered through many of Beijing's so-called 'private' sector entities that are in bed with (President) Xi (Jinping)'s communist party," he added. Meng was arrested in the western city of Vancouver on December 1, Canada's ministry of justice said in a statement. The ministry said the US is seeking her extradition and she faces a bail hearing on Friday, adding it could not provide further details due to a publication ban that was sought by Meng, whose father, Huawei founder Ren Zhengfei, is a former Chinese People's Liberation Army engineer.

The arrest occurred on the same day that US President Donald Trump and Xi struck the trade war truce at a summit in Argentina. China's embassy in Ottawa demanded Meng's release. "The Chinese side firmly opposes and strongly protests over such kind of actions which seriously harmed the human rights of the victim," the embassy said in a statement. "The Chinese side has lodged stern representations with the US and Canadian side, and urged them to immediately correct the wrongdoing and restore the personal freedom of Ms Meng Wanzhou."

Huawei said it was unaware of any wrongdoing by Meng and was provided "very little information" about the charges. "Huawei complies with all applicable laws and regulations where it operates, including applicable export control and sanction laws and regulations of the UN, US and EU," the company said in a statement. The Wall Street Journal reported in April that US Department of Justice had opened an investigation into suspected violations of Iran sanctions by Huawei.

The New York Times said the company had been subpoenaed by the Commerce and Treasury Departments over alleged violations of Iran and North Korea sanctions. Huawei is not the first Chinese telecoms equipment firm to face the ire of US authorities. Earlier this year, the US imposed a seven-year ban on the sale of crucial US components to Chinese smartphone maker ZTE after finding it had failed to take action against staff who were responsible for violating trade sanctions against Iran and North Korea.

The ban nearly killed the Chinese tech company, which said it was forced to cease major operations in May. A month later, Washington and Beijing reached a deal that would strike ZTE from the sanctions list -- just days after China reportedly offered to ramp up purchases of American goods to help cut the yawning trade imbalance with the US. American officials denied any connection between the two.

In exchange, ZTE agreed to pay a hefty USD 1 billion fine and put an aditional USD 400 million in escrow in case of future violations. It was also ordered to replace its board of directors and retain outside monitors. The case showed that China is highly dependent on imports of US-made semiconductors or computer chips and reinforced Beijing's need to become self-reliant on this key technology. Huawei is one of the world's largest telecommunications equipment and services providers.

But despite global success, its US business has been tightly constrained by worries it could undermine American competitors and that its cellphones and networking equipment, used widely in other countries, could provide Beijing with avenues for espionage. In May, the Pentagon said that devices from Huawei and ZTE posed an "unacceptable" security risk. Personnel on US military bases are banned from buying equipment manufactured by the Chinese tech firms.

Over the summer, Australia barred Huawei from providing 5G technology for wireless networks in the country over espionage fears. New Zealand followed suit in November, but said the issue was a technological one. Britain's largest mobile provider too has joined the global ban on Huawei. On Wednesday, BT announced it was removing Huawei's telecommunications equipment from its 4G cellular network, following a warning from the head of MI6 foreign intelligence service that singled out the Chinese company as a potential security risk. Despite being essentially barred from the critical US market, Huawei surpassed Apple to become the world's number two smartphone maker in the second quarter of this year.