A famed natural rock formation, Darwin’s Arch in the Galapagos island has collapsed into the pacific ocean on Tuesday. The Ecuadorean environmental officials have confirmed the news by posting some pictures on social media and said that it has collapsed as a result of ‘erosion’. 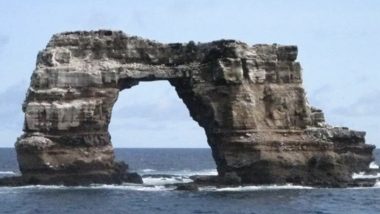 One of the most iconic natural rock formations, Darwin’s Arch in the Galapagos Islands has collapsed into the Pacific Ocean on Tuesday. A famed natural rock formation, Darwin’s Arch is very popular among photographers, tourists, and divers. The Ecuadorean environmental officials have said that it has collapsed due to the result of ‘erosion’. Ecuador’s Environment Ministry has posted some pictures on social media wherein it can be seen that the two supporting columns are still standing while the rubble from the top of the arch had collapsed into the ocean.

“We report that the iconic Arc of Darwin collapsed,” to confirm the news, the ministry wrote in Spanish on its Facebook page on Tuesday. The whole statement of the ministry read as, “The Collapse of Darwin’s Arch, the attractive natural bridge found less than a kilometre from the main area of Darwin Island, was reported.”

Darwin’s Arch is a popular spot for scuba divers; the 43-metre (141-feet) high rock formation stands at the northernmost tip of the Galapagos Islands. It is named after British naturalist Charles Darwin.

According to the Aljazeera report, the director of conservation at Galapagos Conservancy, Washington Tapia said, “Obviously, all the people from the Galapagos felt nostalgic because it’s something we’re familiar with since childhood, and to know that it has changed was a bit of a shock.” He also added, “However, from a scientific point of view, it’s part of the natural process. The fall is surely due to exogenous processes such as weathering and erosion which are things that normally happen on our planet.”

The Galapagos is a home to unique flora and fauna that inspired British naturalist Charles Darwin’s theory of evolution. It is a remote volcanic archipelago in the Pacific Ocean 600 miles (965 kilometres) west of Ecuador. The 234 islands are a part of a World Heritage site and a biosphere reserve. Four of the islands are home to almost around 30,000 people.

(The above story first appeared on LatestLY on May 19, 2021 09:58 AM IST. For more news and updates on politics, world, sports, entertainment and lifestyle, log on to our website latestly.com).