International Women’s Day 2022: From Kamala Harris to Ursula Von Der Leyen, Here is a List of Powerful Women Leaders Around the World

The purpose of celebrating International Women's Day is to give respect to women in the society and to make women aware about their rights. Various programs, awareness campaigns are organized on the occasion of International Women's Day all over the world. Women are breaking age-old patriarchal doctrines and challenging what was traditionally considered male bastions 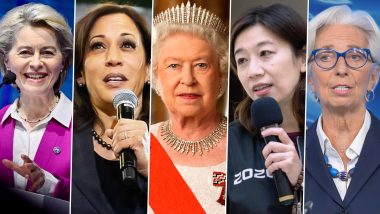 Here is a list of some of the powerful women leaders in the world on International Women’s Day 2022.

Lagarde is a French politician and lawyer who is the current President of the European Central Bank, a position she has held since November 1, 2019.   International Women's Day 2022: Know Significance Of Purple Colour And Why People Wear Purple Dress For Celebrating The Special Day

Prior to this appointment and between July 2011 and September 2019, she was the Managing Director of the International Monetary Fund.

Tsai Ing-wen is a Taiwanese politician and academic serving as the President of the Republic of China since 2016. A member of the Democratic Progressive Party, Tsai is the first female president of Taiwan. She has served as Chair of the DPP since 2020, and previously from 2008 to 2012 and 2014 to 2018.

Tsai's leadership through Covid time is seen as a global model in 2020, Taiwan instituted a rigorous track and trace program to prevent mass contagion. Tsai has vowed to make Taiwan an indispensable member of the world by stimulating the economy with initiatives in biotech, defence, and green energy.

As the longest-reigning monarch in British history, Queen Elizabeth II has held a place of power on the world stage for over 65 years. Queen Elizabeth II was crowned on June 2, 1953, in Westminster Abbey, when she was just 27. For the first time, the coronation was broadcast globally.

Queen Elizabeth has four children — Charles, Anne, Andrew, and Edward. Charles was made the Queen's official successor in 1969 after he was granted the title of the Prince of Wales. Queen Elizabeth II is currently 94 years old, and though the monarchy does not typically interfere with political matters, the Queen meets regularly with her prime ministers.

During her time as minister of defense, von der Leyen called for increased military spending in order to improve the state of Germany's defense system, in which many tanks and other military objects were not deployable. Since taking charge as president of the European Commission, she is facing one of her difficult tasks now after Russia’s invasion of Ukraine.

(The above story first appeared on LatestLY on Mar 07, 2022 10:28 PM IST. For more news and updates on politics, world, sports, entertainment and lifestyle, log on to our website latestly.com).