The UK had voted to leave the EU in a referendum in June 2016 and since then the contours of what that exit would exactly look like has dominated the politics of the country, bringing Johnson to power with a promise of leaving the bloc with an FTA that is beneficial to both sides. 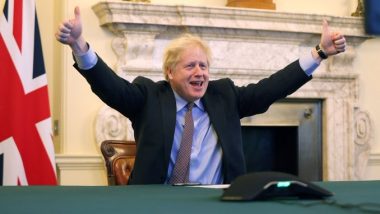 London, December 24: "The deal is done," was the message posted on social media alongside an image of a jubilant UK Prime Minister Boris Johnson with his arms in the air, moments after news of a post-Brexit free trade agreement (FTA) hit the headlines on Thursday.

He soon took to the podium at 10 Downing Street in London to declare that he had kept his promise to the British electorate, who had voted for Brexit in a referendum in June 2016 and then handed him a thumping majority in December 2019 on a manifesto that centred around getting Brexit done.

"We have concluded the biggest trade deal yet and delivered on what the British people voted for," said Johnson, visibly in much higher spirits than he has seemed at these briefings usually dominated by COVID-19 infection rates and tougher lockdown measures. Brexit Trade Deal Sealed Between UK and European Union.

Declaring that the UK had taken back control of its "destiny, money, borders, laws and waters", the UK prime minister hailed the new "comprehensive, Canada style, free trade deal" that will allow goods to be sold "without tariffs and without controls in the EU markets".

"We will be able to decide how and where we are going to stimulate new jobs and new homes in freeports and new green industrial zones. For the first time since 1973, we will be an independent coastal state with full control over our waters," he said.

On one of the main sticking points in the trade negotiations, he revealed that the fish transition period or status quo will last five and a half years, after which there is "no theoretical limit" to the amount of fish British fishermen can catch in the country's waters.

And, striking a conciliatory tone for the EU at the end of long-drawn and at times acrimonious talks, Johnson added: "I think this deal means a new stability, and a new certainty in what has sometimes been a fractious and difficult relationship".

"We will be your friend, your ally, your support and – let it never be forgotten – your number one market. This country will remain culturally, historically, strategically, geologically attached to Europe," he said.

Reflecting on the crucial turning point achieved with the new free trade agreement (FTA), Johnson said it would finally resolve a question that has "bedevilled our politics for decades" and allow the UK to forge ahead as a non-member of the 27-member economic bloc from January 1, 2021.

He also indicated that British MPs will be recalled to Parliament to ratify the deal by December 30, just a day before the Brexit transition period is due to end.

The UK had voted to leave the EU in a referendum in June 2016 and since then the contours of what that exit would exactly look like has dominated the politics of the country, bringing Johnson to power with a promise of leaving the bloc with an FTA that is beneficial to both sides.

The vote in favour of Brexit was a fairly close one and to those who voted against Brexit, Johnson sought to reassure them of a lucrative new trading relationship worth nearly 690 billion pounds a year.

"My message to everybody on both sides of that argument in 2016 is that it is now a long time behind us… This is a great new deal with a great new trading relationship and partnership that I think will bring prosperity to both sides," he said. Will Boris Johnson Cancel His Visit to India for Republic Day 2021 Event After Detection of New Coronavirus Strains? MEA Responds.

The agreement, which Johnson said runs into 500 pages, will now be read through in minute detail by all 27 EU member-countries and cross-party MPs in the UK before ratification of the terms of what a post-Brexit future will look like for both sides.

Significant changes are expected in various sectors of the economy but the fact that a deal has been agreed means these changes would be less damaging than a no-deal Brexit was likely to be.