In the month of June, Ardern gave birth to her first child, making her only the second world leader to give birth while in office. 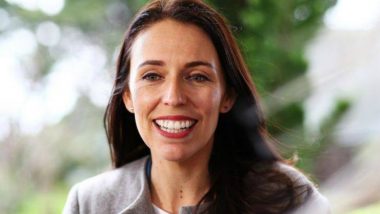 New Zealand, September 25: It was only last month that New Zealand's Prime Minister Jacinda Ardern was back from her six-week maternity leave to resume work, that her baby has made a UN debut recently. According to reports, the first baby of New Zealand the PM took her baby girl Neve with her to speak at a peace summit in the General Assembly. The baby even got her nappy changed in a room filled with the Japanese delegation. Jacinda Ardern, New Zealand PM Back From Her 6-Weeks Maternity Leave.

Because everyone on twitter's been asking to see Neve's UN id, staff here whipped one up.

I wish I could have captured the startled look on a Japanese delegation inside UN yesterday who walked into a meeting room in the middle of a nappy change.

In the month of June, Ardern gave birth to her first child, making her only the second world leader to give birth while in office. According to a BBC report, even on her leave, the PM continued to read cabinet papers, and was consulted on significant issues. She is the youngest Prime Minister New Zealand had since 1856.

These photos of New Zealand prime minister Jacinda Ardern, partner Clarke Gayford, and their baby Neve at the UN are lovely - and how things should be... https://t.co/cyw2jNeMqJ pic.twitter.com/fIE0ST1AWe

Her partner Clarke Gayford and Jacinda have announced the name of their newborn daughter – Neve Te Aroha Ardern Gayford. Neve, derived from the Irish name Niamh, means ‘bright’ or ‘radiant’ and Te Aroha means ‘love’ in te reo Maori. The baby is known as Neve Gayford.

(The above story first appeared on LatestLY on Sep 25, 2018 12:32 PM IST. For more news and updates on politics, world, sports, entertainment and lifestyle, log on to our website latestly.com).