The Israeli army wrote on Twitter that it had targeted and killed three Hamas activists in an airstrike. Israel was conducting airstrikes on the coastal enclave in response to a barrage of rockets fired towards southern Israel as well as Bet Shemesh, near Jerusalem, and Jerusalem itself. 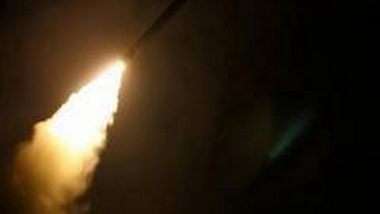 Jerusalem, May 11: Tensions simmering in Jerusalem in recent days have taken deadly turn as militants in the Gaza Strip and Israel exchanged attacks, with at least 20 people killed, according to officials.

The Palestinian Health Ministry said nine children were among the 20 killed and more than 65 people were injured. It was initially unclear in what circumstances the people died, DPA news agency reported.

The Israeli army wrote on Twitter that it had targeted and killed three Hamas activists in an airstrike. Israel was conducting airstrikes on the coastal enclave in response to a barrage of rockets fired towards southern Israel as well as Bet Shemesh, near Jerusalem, and Jerusalem itself. Jerusalem Violence: 153 Palestinians in Hospital After Israeli Police Fire Tear Gas, Stun Grenades and Rubber Bullets at Holy Site.

The last time a rocket alert sounded in the city was in summer 2014, said an army spokesman. Meanwhile, the Israeli military said more than 150 rockets were fired by militant Palestinian groups from the Gaza Strip towards Israel on Monday. Dozens were intercepted by Israel's Iron Dome defence system.

Israeli Prime Minister Benjamin Netanyahu vowed that Israel would "respond with great force". "This evening, on Jerusalem Day, the terrorist organisations in Gaza have crossed a red line and attacked us with missiles in the outskirts of Jerusalem," he said.

Violent clashes between Israeli security forces and protesters in the area around what is known as the Temple Mount to Jews and the Noble Sanctuary to Muslims in Jerusalem have broken out in recent days. Palestinian rescue workers on Monday said that more than 300 people were injured, while Israeli police say two dozen officers were hurt.

The Islamist Hamas movement had issued an ultimatum telling Israel to withdraw settlers and police from the holy site and from the neighbourhood of Sheikh Jarrah in Jerusalem by Monday night. Shortly after it ended, reports of mass rocket attacks began.

A Hamas spokesman said the rockets were a "message" to Israel and a "response to its crimes and aggressions against the holy city." The Islamic Jihad group in Gaza has also claimed responsibility.

An Israeli army spokesman said several Palestinian organisations had been involved in the attacks, but Hamas is the one to be blamed. He added that it was Israel's intention to deal Hamas a heavy blow.

The situation in the West Bank and in the Arab-dominated eastern part of Jerusalem has been tense since the beginning of the fasting month of Ramadan, which is set to end later this week.

(The above story first appeared on LatestLY on May 11, 2021 09:02 AM IST. For more news and updates on politics, world, sports, entertainment and lifestyle, log on to our website latestly.com).