North Korea's leader, Kim Jong Un, is in grave danger after surgery. As per reports, Kim recently missed the celebration of his grandfather's birthday on April 15, which gave rise to more speculations about his well-being. 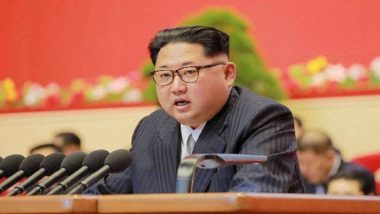 Seoul, April 21: North Korea's leader, Kim Jong Un, is in grave danger after surgery, according to a US official.  As per reports, Kim recently missed the celebration of his grandfather's birthday on April 15, which gave rise to more speculations about his well-being. He recently underwent a "cardiovascular surgical procedure”. Kim Jong Un’s Sister Kim Yo Jong Rises in North Korea Hierarchy, Reappointed as Alternate Member of Political Bureau of the Central Committee.

An NBC reporter had earlier tweeted that Kim is brain dead following cardiac surgery and has slipped into a coma. She, however, later deleted the tweet and said that she is waiting for confirmation about the North Korean leader's health.

Here's what the NBC reporter tweeted:

Kim's unprecedented absence from events last week marking his grandfather’s birthday has been fuelling speculations about the health of the North Korean leader.  April 15 is North Korea's most important holiday, the anniversary of the birth of the country's founding father, Kim Il Sung.

Reportedly, whenever North Korean leaders have not shown up to important events in the past, it has sometimes turned out to be a major development. Kim Jong Il's absence from a parade celebrating North Korea's 60th anniversary in 2008 was later revealed that he had a stroke, after which his health continued to decline until his death in 2011.

Recently, North Korean leader Kim Jong Un's powerful younger sister has been reinstated to a key decision-making body, state media reported Sunday, marking her rise in the isolated nation. Long one of her brother's closest advisers, Kim Yo Jong was reappointed an alternate member of the Political Bureau of the Central Committee in a reshuffle of top officials.

(The above story first appeared on LatestLY on Apr 21, 2020 07:45 AM IST. For more news and updates on politics, world, sports, entertainment and lifestyle, log on to our website latestly.com).