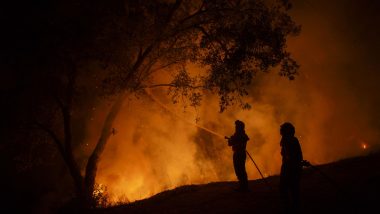 Los Angeles, Aug 14: An aggressive wildfire near Los Angeles that has already burnt 10,500 acres with zero per cent containment, was threatening more than 5,000 structures, authorities said.

As of Thursday, the fire has already three structures, reports Xinhua news agency.

The blaze, dubbed the Lake Fire, was first reported on Wednesday afternoon in the Angeles National Forest located north of Los Angeles downtown, and spread to over 10,000 acres within three hours.

Several structures are threatened by the fire which is growing "with a very rapid rate of speed" and mandatory evacuations are in place, according to the InciWeb, an interstate incident information system.

The Los Angeles County Fire Department said on Thursday morning that more than 1,000 fire fighters from the Angeles National Forest and other agencies are working together to battle this fire.

Fire officials were quoted by the local CBS news channel as saying that the blaze is unusual since it developed early in the fire season and spread as rapidly as it did without strong winds.

It's also a history-making event as some of the areas caught fire for the first time since 1968.

(The above story first appeared on LatestLY on Aug 14, 2020 12:47 PM IST. For more news and updates on politics, world, sports, entertainment and lifestyle, log on to our website latestly.com).