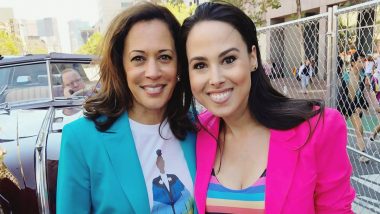 According to a report published in the Los Angeles Times, White House officials are concerned about the promotion pattern of Meena Harris using her aunt's name. "Behavior needs to change," reported the media house quoting a White House official. Notably, US President Joe Biden and Kamala campaigned against Donald Trump's family using government resources for personal use.

After the US Presidential elections 2020, White House lawyers asked 36-year-old entrepreneur not to produce products with VP's name on them. A white House official told LA Times that Meena's book, "Vice President Aunty" sweatshirts, other products which were previously sold were not allowed under new rules. Meena Harris’ Husband Nikolas Ajagu’s Pair of Dior Air Jordan 1s Steal the Show at US Presidential Inauguration, Here’s What VP Kamala Harris’ Niece Has to Say!

It’s no coincidence that the world’s oldest democracy was attacked not even a month ago, and as we speak, the most populous democracy is under assault. This is related. We ALL should be outraged by India’s internet shutdowns and paramilitary violence against farmer protesters. https://t.co/yIvCWYQDD1 pic.twitter.com/DxWWhkemxW

Meena is Harvard Law graduate and data privacy and cybersecurity attorney. She has over six lakh followers on Instagram and over 689.8K followers on Twitter. Notably, Meena came out in support of the farmers' protest. She also condemned internet shutdown by the Indian government after the violence during the January 26 tractor rally.

(The above story first appeared on LatestLY on Feb 15, 2021 06:13 PM IST. For more news and updates on politics, world, sports, entertainment and lifestyle, log on to our website latestly.com).