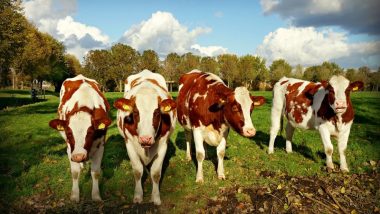 Nigel George Rowan from Waikato also faces permanent restrictions on the number of animals he can own, Xinhua news agency reported on Saturday citing the statement as saying.

Rowan pleaded guilty to three charges under the Animal Welfare Act at the Hamilton District Court for under-feeding 178 milking cows, 50 dry cows and a mob of 60 heifers. New Zealand Bans Live Cow Exports and Other Farm Animals by Sea Due to Welfare Concerns.

The court heard that the situation could have been managed, but Rowan allowed conditions on his farm to deteriorate.

Between 2018 and 2020, he received advice and a plan to improve the body condition of his animals from a number of parties, including his industry bodies and a farm consultant.

"Rowan failed his animals by not taking opportunities to address the issues. Our Animal Welfare Inspectors, backed by a veterinarian, inspected all 288 cattle at the property and found the farm low on pasture," Mikkelsen said.

"Supplementary feed was available but it wasn't being fed out at a level that would improve the situation for his animals.

"The body weight of many of the milking mob was too low for milking and some of these animals had become emaciated, while others showed signs of stunted growth," Mikkelsen added.

(The above story first appeared on LatestLY on Sep 25, 2021 03:15 PM IST. For more news and updates on politics, world, sports, entertainment and lifestyle, log on to our website latestly.com).