Places of Worship vs COVID-19 Restrictions: US Supreme Court Sides With Religious Bodies in 5-4 Judgment Against New York Governor

The top court contended with the petitioners that religious places were subject to more stern restrictions, as compared to other centres of non-essential activities. The verdict also noted that there is "no evidence" to suggest that worship halls have contributed to a spike in coronavirus infections. 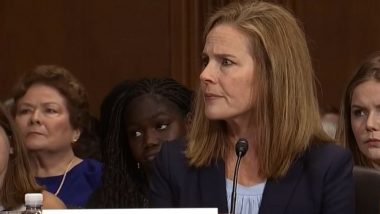 Washington, November 26: In a late-night verdict on Thursday, the US Supreme Court ruled by 5-4 in favour of the religious bodies who had moved a plea against New York Governor Andrew Cuomo. The organisations had alleged the violation of their constitutional rights through imposition of harsher COVID-19 restrictions on places of worship, as compared to other secular facilities. Donald Trump Says He Made the Right Choice With His Supreme Court Nominee Amy Coney Barrett.

The top court contended with the petitioners that religious places were subject to more stern restrictions, as compared to other centres of non-essential activities. The verdict also noted that there is "no evidence" to suggest that worship halls have contributed to a spike in coronavirus infections.

The plea was moved by Roman Catholic Diocese of Brooklyn and Agudath Israel of America against the New York Governor who had imposed strict curbs in most districts on the number of attendees in masses and other religious services.

The curbs are "far more restrictive than any Covid-related regulations that have previously come before the Court, much tighter than those adopted by many other jurisdictions hard hit by the pandemic", said the majority judgment signed by the five judges.

The lower courts had earlier rejected the pleas of both the religious bodies. However, with the apex court finding merit in their application, the New York government would be required to ease the curbs and bring them at par with those imposed on secular facilities.

Analysts in the US linked the court verdict to the impact of Justice Amy Coney Barrett's induction in summer this year. She was nominated to the top court by the Trump administration , following the death of Justice Ruth Bader Ginsburg -- a top liberal icon in the Supreme Court.

Unlike Ginsberg, Barret is a conservative and has openly expressed her views on controversial subjects such as abortion. In the plea filed by the New York religious bodies, she sided with the four conservative judges which led to a legal victory for the litigants.

(The above story first appeared on LatestLY on Nov 26, 2020 05:32 PM IST. For more news and updates on politics, world, sports, entertainment and lifestyle, log on to our website latestly.com).