Pulitzer Prizes 2021 Winner List: Check Full List of Winners Who Were Honoured With Journalism’s Highest Honour for Their Best Works

The 2021 Pulitzer Prizes, touted to be as journalism’s highest honor, were announced after a historic year gripped by the coronavirus pandemic, the racial reckoning after the police killing of George Floyd, and the Presidential Elections in the US. 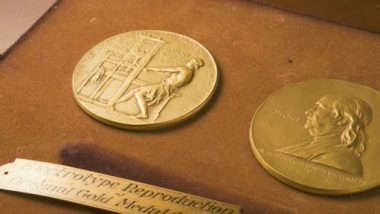 New York, June 12: The Pulitzer Prizes 2021 in journalism and the arts were announced by the Columbia University on Friday during a remote ceremony.  The 105th class of Pulitzer Prize winners in Journalism, Books, Drama and Music were announced at 1 p.m. Eastern Time on Friday, June 11. The 2021 Pulitzer Prizes, touted to be as journalism’s highest honor, were announced after a historic year gripped by the coronavirus pandemic, the racial reckoning after the police killing of George Floyd, and the Presidential Elections in the US.

The Pulitzer Prizes 2021 have been awarded after recognizing the best work in a year in which people isolated themselves because of the deadly COVID-19 pandemic and took to the streets over racial injustice. Check Full List of Pulitzer Prizes 2021 Winners and Finalists.

For courageous, prescient and sweeping coverage of the coronavirus pandemic that exposed racial and economic inequities, government failures in the U.S. and beyond, and filled a data vacuum that helped local governments, healthcare providers, businesses and individuals to be better prepared and protected.

For its urgent, authoritative and nuanced coverage of the death of George Floyd at the hands of police in Minneapolis and of the reverberations that followed.

For reporting that uncovered a systematic failure by state governments to share information about dangerous truck drivers that could have kept them off the road, prompting immediate reforms.

For an exhaustive examination, powered by a pioneering data analysis of U.S. federal court cases, of the obscure legal doctrine of “qualified immunity” and how it shields police who use excessive force from prosecution.

Ed Yong of The Atlantic

For a series of lucid, definitive pieces on the COVID-19 pandemic that anticipated the course of the disease, synthesized the complex challenges the country faced, illuminated the U.S. government’s failures and provided clear and accessible context for the scientific and human challenges it posed.

Kathleen McGrory and Neil Bedi of the Tampa Bay Times

For resourceful, creative reporting that exposed how a powerful and politically connected sheriff built a secretive intelligence operation that harassed residents and used grades and child welfare records to profile schoolchildren.

For a year-long investigation of K-9 units and the damage that police dogs inflict on Americans, including innocent citizens and police officers, prompting numerous statewide reforms.

For a series of clear and compelling stories that used satellite imagery and architectural expertise, as well as interviews with two dozen former prisoners, to identify a vast new infrastructure built by the Chinese government for the mass detention of Muslims. (Moved by the Board from the Explanatory Reporting category, where it was also entered and nominated.)

For a deeply affecting account of the killing of Ahmaud Arbery that combined vivid writing, thorough reporting and personal experience to shed light on systemic racism in America.

For a brave and gripping account of global migration that documents a group’s journey on foot through the Darién Gap, one of the most dangerous migrant routes in the world.

For penetrating and historically insightful columns that guided Richmond, a former capital of the Confederacy, through the painful and complicated process of dismantling the city's monuments to white supremacy.

For unrelentingly relevant and deeply engaged criticism on the intersection of race and culture in America, written in a singular style, alternately playful and profound.

For a collection of photographs from multiple U.S. cities that cohesively captures the country's response to the death of George Floyd.

For a poignant series of photographs that takes viewers into the lives of the elderly in Spain struggling during the COVID-19 pandemic.

For an investigative series on “no compromise” gun rights activists that illuminated the profound differences and deepening schism between American conservatives.

A majestic, polyphonic novel about a community’s efforts to halt the proposed displacement and elimination of several Native American tribes in the 1950s, rendered with dexterity and imagination.

A funny, deeply felt consideration of Black masculinity and how it is perceived, filtered through the experiences of a loving gay couple and their extended family as they prepare for a culinary competition.

A nuanced account of the complicated role the fast-food industry plays in African-American communities, a portrait of race and capitalism that masterfully illustrates how the fight for civil rights has been intertwined with the fate of Black businesses.

The Dead Are Arising: The Life of Malcolm X, by the late Les Payne and Tamara Payne (Liveright/Norton)

A powerful and revelatory account of the civil rights activist, built from dozens of interviews, offering insight into his character, beliefs and the forces that shaped him.

A collection of tender, heart-wrenching and defiant poems that explore what it means to love and be loved in an America beset by conflict.

Wilmington’s Lie: The Murderous Coup of 1898 and the Rise of White Supremacy, by David Zucchino (Atlantic Monthly Press)

A gripping account of the overthrow of the elected government of a Black-majority North Carolina city after Reconstruction that untangles a complicated set of power dynamics cutting across race, class and gender.

Premiered at David Geffen Hall, Lincoln Center, New York City on February 13, 2020, a musical journey full of surprise, with powerful brass and rhythmic motifs that incorporate Black music traditions from the US and the Caribbean into a Western orchestral fabric.

For courageously recording the murder of George Floyd, a video that spurred protests against police brutality around the world, highlighting the crucial role of citizens in journalists' quest for truth and justice.

Read full list of those recognized by the Pulitzer Board, watch the video of the Prize announcement:

Congratulations to the 105th class of #Pulitzer Prize winners and finalists!

Read the full list of those recognized by the Pulitzer Board, watch the video of the Prize announcement and explore the work:https://t.co/zbpKDjSASO

The announcement of the prizes itself was originally scheduled for April 19 but the Pulitzer Prize Board postponed it until June to give its 18 members a chance to debate the entries in person, instead of remotely. The Pulitzer Prizes in journalism were first awarded in 1917 and are considered the field's most prestigious honor in the United States. The awards luncheon traditionally held at Columbia University in May also stands postponed this time.

(The above story first appeared on LatestLY on Jun 12, 2021 10:36 AM IST. For more news and updates on politics, world, sports, entertainment and lifestyle, log on to our website latestly.com).