Russia Claims Ukrainian Helicopters Carried Out Strikes On Its Territory

Russia has claimed that two Ukrainian helicopters were responsible for an attack on the border village of Klimovo in the Bryansk Region on Thursday, which left seven persons injured. 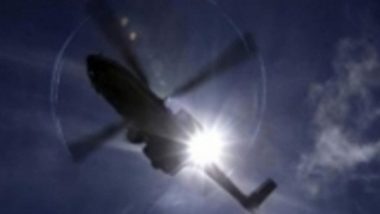 Moscow, April 14: Russia has claimed that two Ukrainian helicopters were responsible for an attack on the border village of Klimovo in the Bryansk Region on Thursday, which left seven persons injured.

The incident had earlier been attributed to the Ukrainian military by the region's governor. An update on the attack was given by Russia's Investigative Committee, which said it was treating the incident as a criminal conspiracy, RT reported.

Its statement said two Ukrainian military attack helicopters crossed into the Russian airspace at around midday local time, flying at a low altitude. The aircraft fired heavy weapons at the village, delivering at least six strikes on residential buildings, the statement said. Seven people were injured and six houses were damaged in the attack, the investigators said.

Earlier, health officials said a two-year-old boy and his mother, who is pregnant, were among the seven victims of the attack. Two people were said to be in a serious condition, RT reported. Russia-Ukraine War: Vladimir Putin Says, 'Tell Volodymyr Zelenskyy, I Will Thrash Them' After Receiving Peace Offer From Ukrainian President.

The attack was one of two separate incidents in the border area on Thursday that Russian officials blamed on Ukrainian forces. The second one was an alleged Ukrainian shelling of a border crossing some 40km southwest of Klimovo. Russian border guards said a group of some 30 refugees from Ukraine came under mortar fire as they were passing the checkpoint.

The Russian Defense Ministry had warned on Wednesday that it may escalate military action in Ukraine if the country's military conducts more attacks on targets in Russia.

"Decision-making centres" in Kiev may be targeted, the statement said.

(The above story first appeared on LatestLY on Apr 14, 2022 11:18 PM IST. For more news and updates on politics, world, sports, entertainment and lifestyle, log on to our website latestly.com).