The Russian Defence Ministry said that the country's forces on Sunday disabled an airfield belonging to the Ukrainian Air Force in Starokonstantinov. 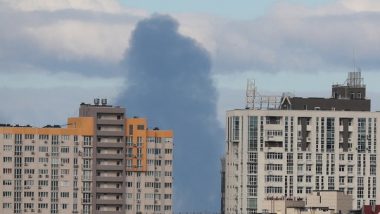 New Delhi, March 6: The Russian Defence Ministry said that the country's forces on Sunday disabled an airfield belonging to the Ukrainian Air Force in Starokonstantinov.

Igor Konashenkov, the Ministry's chief spokesman, further said that the Russian military has continued to strike the military infrastructure of Ukraine as the war entered the 11th day on Sunday, RT News reported. Russia-Ukraine War: Hundreds of Men Line Up in Kyiv To Join Ukrainian Army.

On Saturday evening as a result of a massive attack, 61 military facilities on the territory of Ukraine were hit, he claimed. Bomber and attack aircraft hit three radar stations of the Armed Forces of Ukraine, the missile forces destroyed the S-300 air defense system, said Konashenkov.

He further claimed that over the past day, Russian fighters and air defense systems also shot down "four Su-27 and one MiG-29 aircraft in the Zhitomir region, Su-27 and Su-25 in the Radomyshl region, one Su-25 in the Nizhyn region, two Mi-8 helicopters in near Kiev, six unmanned aerial vehicles, including Bayraktar TB-2".

(The above story first appeared on LatestLY on Mar 06, 2022 02:45 PM IST. For more news and updates on politics, world, sports, entertainment and lifestyle, log on to our website latestly.com).